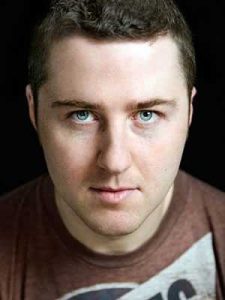 1. Do you think it’s important to laugh?

Generally, of course I do. But context is very important. If you’re a undertaker or a gynaecologist, it’s unwise to whilst at work.

2. Do you see your talent as a gift or a responsibility?

3. Where do you see yourself in the hierarchy of comedy?

4. Has social media liberated you as a comedian or has it made life more difficult?

I try to avoid social media, as I think it brings out the worst in people.

5. I imagine your humour can get you into trouble, have you ever bitten off more than you can bite with a joke?

Frequently. But you can’t know if a joke will work unless you can try it. Humour doesn’t work in a vacuum. For a start, it’s too noisy and full of dust.

6. What would you do if an enraged fan was to make threats to kidnap you?

Laugh. Then panic. Then invest in a rape alarm.

7. Who are the comedians that influenced you most in your acts and why?

Loads of people. Laurel & Hardy, Harry Hill, Daniel Kitson, Glenn Wool, Steve Hall, Rob Deering, Rhod Gilbert. They all made me laugh, and a lot of them offered me support and advice.

8. How is life for a comedian – do you get a lot of free stuff everywhere or do strangers approach you and ask that you tell jokes?

I probably get more free drinks than most people. I can lie in on a weekday. I spend far too much of my life in trains and hotels.

9. Who do you think is the Dan Bilzerian of the comedy scene?

I had to google him. So, thanks for that. I don’t think we have anyone who’s that big a dickhead.

10. What’s the most awkward moment resulted from your humour in your dating life?

I ended up in a hot tub with Dan Bilzerian but he caught site of his own reflection in the water and almost drowned trying to kiss his own face.

11. Do you ever worry if you’ve still got it? Do you get writer’s block when coming up with your material?

I do still have it It’s in a drawer in my bedroom. I get writer’s block, yeah.

Have a rest and then attack it from a different angle.

13. If you didn’t have the option to become a comedian, you would be a …

14. What do you think is the ideal percentage of controversy in a good stand-up?

The amount of controversy is usually dictated by the intelligence of the comic and the intelligence of their audience. If these differ wildly, you’ll likely get controversy. I try to avoid it. It’s not particularly funny, and it’s incredibly tedious to have people tell you how offended they are. It’s like hearing someone talk about their dream. But they’re very angry. And want you to explain it to them.

15. And it has to go on the record, no matter how clichee the question may be: where do you find your material?

Previous Article
Next Article
0
Monique Chambers September 3, 2014
No Comments Yet