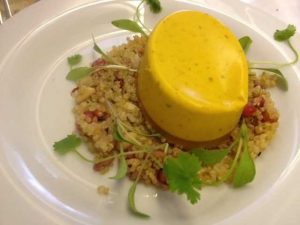 I have wanted to do this review for a long time and finally, the opportunity was presented to me. Club World tickets in hand for a flight to San Francisco on BA, and an appetite fueled further by the adrenalin associated with holidays, I was greeted and seated by a pleasant Glaswegian steward, who tended to our section, his jolly demeanor making any anxiety of a long haul flight, slip away.

The menu (yes, menu) has an introduction that explains ‘height cuisine’ and how a team of chefs has worked to create a choice of food and wines that satisfy at altitudes of 30,000 feet.
On our S shaped seats, you are able to have dinner facing your partner and not have to avoid their elbows; should you not wish to share the experience with your opposite number, a screen can be raised to separate you.
John chose the Scottish smoked salmon (perhaps brought down by the steward)  served with capers and lemon, and I chose the more adventurous carrot, coriander and cumin mousse with citrus jelly and a quinoa and pomegranate salad.
Warm breads arrived and their aroma filled the cabin, you could almost be in a restaurant and not flying!
The mousse was perfection, I would need another portion to workout how it was done. The  combination tasty, light and satisfying. Indeed, I could have stopped there.
We had both ordered the beef with port wine sauce, creamed leeks, roasted pumpkin and roasted potatoes. The beef cooked slightly beyond my usual rare, but the sauce made up for the mild dehydration. I succumbed to a glass of Pinot noir and John the Bordeaux, which we later suffered dehydration from.
The other choices on the menu included roast chicken with a wild mushroom and herb sauce, with mashed potatoes, carrots and Savoy cabbage,  a vegetable Tagline, or a Far East salad with seared tiger prawns. Remember we are on a plane. I’d love to se these choices on one menus on land!
I missed the desserts as I felt I had over eaten, though I could nave chosen a lemon and raspberry tart with marscapone, or ice cream, fruit or chocolates. John had the coastal cheddar and Somerset Camembert which he devoured before I could do any quality control.
An open bar, (free) tuck shop with crisps, sweets and biscuits that you help yourself to as and when you can fit in more food is at the end of the section, and cakes and brownies are available with an afternoon tea being served including a variety of interesting sandwiches, scones and jam with clotted cream – how very, wonderfully British.

Live from the Bolshoi theatre - Spartacus