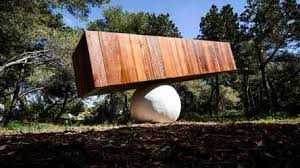 Malta’s first permanent Sculpture Garden was officially inaugurated by President George Abela at Verdala Palace with the works of art of 11 contemporary artists.

A children’s area has also been created in the form of a life-size checkerboard similar to that used in the board game chess with two squares arranged in two alternating colours, black and white, to serve as an inspirational space. The King, Knight, Bishop and Queen pieces have been whitewashed and children will be allowed to express their creativity by painting and drawing on them.
The Ecosystems Management Unit within the Environment Protection Directorate, MEPA was involved in this project by providing information about the biodiversity of Verdala and surrounding areas which form part of the Buskett and Girgenti Natura 2000 site. This information was used for the production of three panels describing the important and protected habitats typical of the Mediterranean Region and important and protected fauna and flora, some of which are endemic to the Maltese Islands.

The gardens and the palace will be open to the public on March 9th.
MEPA and Bank of Valletta supported the Sculpture Garden project.