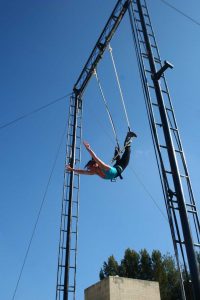 The Cirku Malta was an experience that I am pleased was tinged with Chris Dingli’s humour.

I missed a few bits due to jokes being in Maltese and the incessant talking that happens at any event, even when the Prime Minister is speaking. A folk singer, bicycle trickster, jugglers and distracting acts had their turn, the most spectacular being a male ripped gymnastic performer, for want of the official term, and a female hula hoopist who had us rocking in our seats, vicariously helping her keep her hoops up. There was a chap who balanced objects (bikes, chairs etc) on his chin, couldn’t work out how you’d know you could do that….

It had more of the innocent kind of humour my mum would enjoy, indeed, they had the almost sold out audience screeching at laundry hanging, festa and an enemalta scenes. Us pesky foreigners chuckled with recognition, but it was the gymnasts that had us in awe.  So worth going and at only €10 with easy parking and an amazing food truck, it’s a good night out overall. Would have been interesting to have the artistes introduced for future reference, and perhaps some totty with a ‘clap now’ board for the moments when the was an uncomfortable silence, but otherwise, the production was flawless.