The following recipe is one I prefer to cook when I find different leftovers of vegetables at home that have to be consumed soon. You can always change the amount – add some more mushrooms, less coriander or even add something fitting like carrots or zucchini. Just the way you like it. Serves 2. 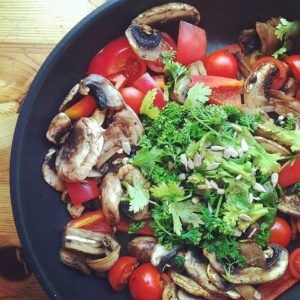 – one pack of mushrooms

– small handful of pumpkin seeds or other nuts

Take one large non-stick cooking pan and prepare it with olive oil on medium heat. In the meantime cut the mushrooms into slices and the bell pepper into strips and then again into squares. Put them into the pan as they will need longer to cook than the tomatoes. I like to add half a tablespoon of salt at this point. Don’t forget to stir the vegetables from time to time.

Now take the cocktail tomatoes and cut them into halves. Put them aside.

Take a little pan and set on medium to full heat. Add the pumpkin seeds and toast until they are of a golden/light brown colour (take care they won’t get black, it happens too fast!). Put them aside to cool down.

When you find the mushrooms and pepper are almost ready, add the tomatoes. They won’t need too long. While the vegetables are cooking, roughly cut the parsley and coriander. Put them aside.

After that, add some pepper and some more salt to the pan to your taste. If you like it spicy, add chilli flakes.

Turn down the heat now and put the herbs on top of the vegetables so that they get a little bit of the heat but still stay fresh (about 1-2 minutes). After that take the pan from the stove and serve the dish.

On hot summer days, this dish fills 2 people but if you’re really hungry, I like to simply cook some rice with coconut milk to make it more special, or do a great creamy parmesan polenta (which is very easy to do: Cook the normal polenta, after that add parmesan and butter. Stir, stir, stir, let it harden and cut it into pieces).

0
Monique Chambers September 6, 2021
No Comments Yet