The “Taste of Med-Asian Fusion workshop and lunch”, organised by John Portelli at Simply Organic’s premises, was indeed a journey of flavour and traditions – but a quite long one, as well.

When I entered the premises in Balzan, I was already welcomed by the wonderful smell of basil and parsley. Mary Licari, a friendly and warm-hearted woman, who was there that day to present her recipes and way of cooking, introduced herself to everyone individually. This gave me the right welcome feeling. We chatted a bit until all of the 11 participants had arrived.

When I looked around the place, I came to the fast conclusion that this was rather a demonstration than a workshop – Mary would cook for us, not with us.

There was a table prepared with herbs, sprouts, spices, fruits, vegetables and kitchen utensils and chairs for us in front of it. No problem (I thought) 4 hours, including lunch and being informed about Mediterranean and Asian food would be okay – although I was a bit disappointed we wouldn’t get our hands on the food at all.

We started with a slight delay and Mary revealed the day’s menu: Middle Eastern flat bread with sun dried tomato and sweet pepper dip and raw lentil dip as a starter, followed by buckwheat pasta with pesto genovese. After that local sweet potato sticks, onion pakora and a flat bread wrap filled with salad containing rucola and fresh sprouts. As a dessert, we had an apple delight with cinnamon and raisins. They even provided self-made almond milk and fruited water which I found a great and healthy idea.

I can already reveal that everything from first to last was delicious. Mary surely knows how to cook and her experience lets her combine different ingredients without really following information of quantities. As soon as I will receive the recipes, I will definitely try some of her creations at home. 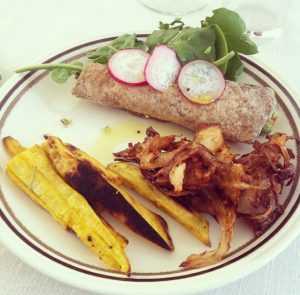 While cooking, Mary explained what and why she was doing something. There was much talking in general: about different organic ingredients, their origins and uses, way of cooking and the like. Actually, everyone exchanged their experiences. I liked it, because this way all the participants were able to take part, ask and learn.

But although the workshop was said to end at about 2pm, Mary was still cooking at that time with no end in sight. Lunch was eventually served at about 3.40pm, but we got to eat the starters earlier, since we were quite hungry and some people even had to leave soon.

The problem was, that Mary, still being supported by Simply Organic’s team, didn’t prepare anything – she had to cut and slice and chop all ingredients during the time of the workshop. And preparing a 4-course menu à deux in 3 to 4 hours for 14 people in total – maybe a bit more planning in advance would have been smarter.

Despite being quite tired at the end of the day the tasty menu and kind personality of Mary made up a bit for the really long workshop. I would do this again, but only with a guarantee of length/ duration and if the participants will be involved in the process of cooking.

New president for Friends of the Manoel

0
Monique Chambers October 6, 2014
No Comments Yet