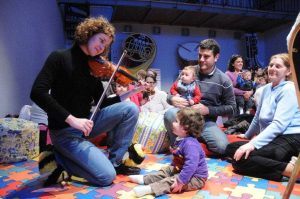 The return to school also marks the start of the performance season at Teatru Manoel. Apart from concerts, recitals, plays, opera and the baroque festival a significant part of this season is dedicated to finding and fostering the next generation of theatre-lovers. This is the aim of the Toi Toi Education Programme which now enters its third season and which is supported by BOV and The ADRC Trust. It is designed and run by educator, performer and music therapist, Rosetta Debattista, and devised to access children’s appreciation of music, irrespective of their age or cultural background.

Rosetta Debattista explains that exposing young children to music from a very early age encourages them to be more culturally aware as they move into adulthood.

“Music has a magical effect on children; at this tender age they seem to be genuinely interested,” says Rosetta Debattista. “They are free and receptive to the beauty of the classical form. Live music stimulates their brains on so many levels and really draws them in”.

“During the 40-minute concerts, children are free to do whatever they like and make any sound they want to accompany the live professional ensemble.  Subconsciously, they will be collecting a wealth of classical music information which will help them relate to music and other art forms later on in life”.

The Toi Toi Programme includes: Toi Toi 022: concerts for babies to two years old. These are baby-friendly 40-minute monthly concerts (with new material every month) of popular classics specially created for babies, with their parents or carers. Toi Toi 325: concert for three to five year olds. These dynamic, friendly concerts of popular tunes and different styles of music are specially created for toddlers with their parents or carers.

Teatru Manoel’s Toi Toi Education Programme also includes other events such as pre-concert talks, behind the scenes, limited editions which are opportunities to meet foreign artists performing at the Manoel as well as baroque workshops (during the Baroque Festival in January).

The children’s concerts run monthly from now till May 2014. For more information and bookings go to www.teatrumanoel.com.mt.

0
Monique Chambers October 2, 2013
No Comments Yet