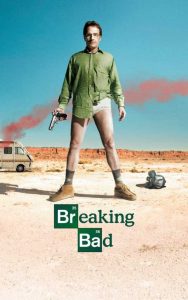 Breaking Bad, winner of Best Television Series – Drama at the 2014 Golden Globe Awards premieres on GO Stars this month, with back-to back episodes being broadcast every Monday evening. The multi-award winning series follows the story of an unremarkable chemistry teacher who turns to an exciting life of crime to provide for the ones he loves after discovering he has terminal cancer. Breaking Bad is one of the four shows to be broadcast on GO Stars for the first time in the coming weeks.

Also premiering on GO Stars soon will be The Bletchley Circle, which tells the story of four wartime female code breakers who go on to investigate a string of grisly murders in post-war London. The Bletchley Circle will be broadcast every Saturday at 9pm, starting 15 February.

Two new series will arrive on GO Stars in March; Hatfields and McCoys starring Academy Award® winner, Kevin Costner which explores tensions in post civil war America between neighbouring states of West Virginia and Kentucky, and, The Blacklist, in which one of the FBI’s most wanted criminal turns himself in and offers to give up everyone he has ever worked with on the condition that he works with a new FBI agent with whom he seemingly has no connection.

GO Stars is available to all Silver, Gold and Interactive TV subscribers from €6.99 a month. More information is available from all GO outlets and exclusive resellers, from www.go.com.mt, or by calling freephone 8007 2121 or 146 from their GO mobile.

Next Article
0
Monique Chambers February 11, 2014
No Comments Yet