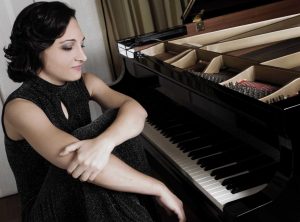 On Thursday 15th May, pianist Joanne Camilleri returns for another exciting recital in Sala Isouard, the last in this venue for this theatre season. The programme includes Bach’s English Suite No.2, Bach-Busoni’s Toccata & Fugue in D minor and the world premiere of Alex Vella Gregory’s Sonata No.5 Litanija.

Joanne is one of Malta’s leading pianists. A prize-winning graduate of the Royal Northern College of Music (UK), Joanne Camilleri has recently been the first pianist to be awarded a Doctorate of Music in Performance by the University of Malta. Described as “a musician of high intelligence and artistic vision” by international pianist William Fong, Joanne’s versatility has seen her perform in numerous venues around Europe as recitalist, concerto soloist, chamber musician and orchestral/continuo player to high acclaim.

She has been invited to perform at prestigious functions including those at the President’s Palace in Malta, at the German Ambassador’s Residency and the American Ambassador’s Residency, as well as other concerts organised under the auspices of the Ambassadors for Ireland, UK, Poland, Tunisia and China. An avid chamber musician, Joanne has worked with many professional partners in various ensembles. As member of the Camilleri Trio, she toured Sweden and UK and recorded a score for a silent film by Yasujirô Ozu which was released on DVD by the British Film Institute.

As a concerto soloist, Joanne has performed concertos by Grieg, Saint-Saens and Chopin with British Orchestras and the Malta Philharmonic Orchestra. She has collaborated with distinguished conductors such as Wayne Marshall, Lancelot Führy, Clark Rundell, Eric Hull, Philip Walsh and Michael Laus. Joanne has recently released her first solo CD titled In Bach’s Footsteps.

Tickets for the Thursday 15th May which starts at 8pm, are €10 with a 50% discount for students, under 25s and kartanzjan and can be bought from www.teatrumanoel.com.mt, bookings@teatrumanoel.com.mt or 2124 6389.