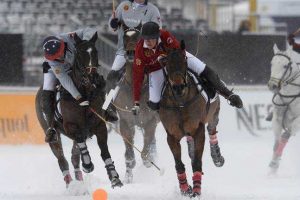 The 30th edition of the St. Moritz Polo World Cup on Snow was opened today. What began 30 years ago with a highly adventurous idea has developed over three decades into the world’s most prestigious and highest-level polo tournament. The anniversary polo tournament will be contested by the four teams BMW, Cartier, Ralph Lauren and Deutsche Bank on the round robin principle, with a view to winning the coveted Cartier Trophy in the final on Sunday, 2 February 2014.

In the winter of 1984,  the adventurous idea of playing the sport on snow and ice was borne. Following a successful trial match on the frozen Lake St. Moritz, the first St. Moritz Polo World Cup on Snow was scheduled for 26 January 1985. While polo on snow is now played in locations such as Aspen in the USA, Cortina in Italy and Tianjin in China, the original in St. Moritz remains the only high-goal tournament on snow and thus the highest-level tournament in the World Polo Tour calendar.

Spectators can look forward to another hard-fought tournament this year. Cartier, Ralph Lauren, BMW and Deutsche Bank will all compete with a team handicap of 17 to 18 goals, collecting valuable points for the World Polo Tour. Each team will play every other team in accordance with the round robin principle, and the tournament will reach its climax in the two finals on Sunday.
The polo village with its various show tents offers a range of attractions aimed at cutting the waiting time between matches. Spectators can for example enjoy a meal or a snack in the Hotel Steffani tent, which will be offering a range of culinary treats ranging from bratwurst to Asian dishes, as well as coffee and cake. Also available is a selection of sophisticated cocktails in the 1724 Tonic Water or Cȋroc Vodka tents. BMW has the new X5 on display, and polo fans can purchase the popular official team and anniversary shirts as well as various accessories directly on the lake from the Ender Sport Polo Shop. On Saturday and Sunday there will be public introductions to the sport of polo (at 1.45 p.m.), and the Huw Lewis Duo will play between the matches.
The highlight off the field will undoubtedly be the gala night at the Kempinski Grand Hotel des Bains, which this year will be offering its guests an unforgettable menu. Three Swiss star chefs have been engaged to prepare the dinner: “Chef of the Year” Tanja Grandits and Park Hotel Vitznau chef Nenad Mlinarevic will create the two starters, while Schauenstein top chef Andreas Caminada will take care of the dessert. The main course will be a world premiere – a joint, six-handed creation by all three chefs, who together boast a total of 53 Gault Millau points.

Why didn’t I accept the invitation?

Check out polostmoritz.com for live match updates over the weekend.