Ray is that rare combination of artist and engineer. Since retiring from designing cars for General Motors, he has created both realistic and semi-abstract works in pencil, ink, pastels, Watercolour, acrylic and oil. His subjects have included military, historic, portraits, nudes, marine and aviation art. Ray has held three solo exhibitions: “Behold the People”, 2013; “Santa Marija Convoy”, 2014; “450th Anniversary of the Siege of Malta”, 2015.

How did you get started?
One has art in their blood. The start was relatively benign: A children’s program that asked kids to send in their best work and the better of the submissions were pinned to the background of the show behind the presenter. Mine, it seems, found favour each week.

Whose artist’s work are you most inspired by?
Too many to put down but I am interested in the human element: Emotions, contorted bodies, sexual behavour and strength of character.
In this, I flag Egon Schiele: A Viennese painter who died in 1918 at a young age.

Describe your work in less than 10 words.
Realistic, using pencil, ink, watercolour, and oil paint and being that of historic, figurative and military art.

What genre do you consider your work to be?
Realism.

Your favorite from among your own artworks?
‘ADRIANA’ An American model sitting in a chair with an open book asleep.

Australia, but the first exhibition in Malta was the “Behold the People”, 2013 at the Casino Maltese, Valletta.

What are you working on at the moment?
A future exhibition on the Ghouls and Ghosts of Malta with researcher Guzi Gatt and Poet Walid Nabram.

How long have you been painting?
Effectively 40 or more years.

Are you a morning person or do you come alive at night?
Strange question. Time doesn’t matter much. I am alive when the muse demands my presence.

How many coffees a day? Don’t embellish.
None. I am a tea person.

Sundays can be very productive for some and very unproductive for others. How do you spend yours?
If I were to plan, I’d have an idea but I normally follow a pattern of doing things by the seat of the pants unless working to a deadline.

Wine and cheese. Yes or no?
Are you offering? If yes, I will take both since you cannot have one without the other.

If you were given a million euros, what would you indulge yourself with?
There is nothing I need and little I want. With 3 studios globally and retired since I was 53 years old, money has far less influence on me than beauty. At the age of 60, my inclination to is help charities. 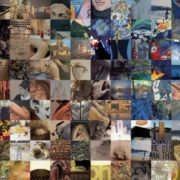 Our artists profiles have been created by various writers including the artists themselves, Christine X, Amber Knights and Paula Fleri-Soler. With 100 of our favourites collated in to one book - its a great gift for art lovers, new home owners, a corporate gift or dinner party offering www.indulge.com.mt/shop

The alternate reality of a traveller's life