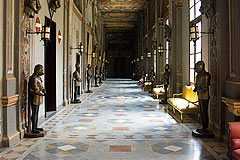 The Second Series of lectures under the Distinguished Patronage of His Excellency Dr George Abela, President of Malta and organised by the Office of the President (coordinated by Comm. Salvator Mousu’) have been scheduled in the Dining Room, The Palace, Valletta.

Lectures start at 6:00p.m. sharp and will last for about an hour, followed by 30 minutes for discussion or question time.  Patrons are kindly requested to be seated a few minutes before starting time.

3 – Monday 30 December. Dr. Alfred Bonnici on:
‘POLITICAL DEVELOPMENTS IN THE TAPESTRY CHAMBER SINCE 1921’

Don't get the end of Summer blues

Next Article
0
Monique Chambers September 16, 2013
No Comments Yet