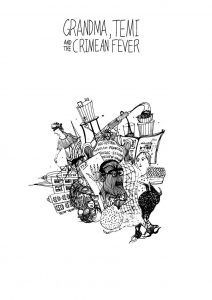 Scientist and artist Ira Melkonyan weaves together a story of personal family history, scientific research, and pharmaceutical treatment in psychology, spanning a period of around 100 years in the rubberbodies collective’ newest performance. The performance, “Grandma, Temi and the Crimean Fever” will be premiered during the Science in the City festival on Friday 27th September at Palazzo Castellania (Ministry of Health), 15 Merchants Street, Valletta.

Melkonyan’s storytelling will appeal to the curious and the adventurous, as it is told from within Valletta’s Palazzo Castellania. The journey culminates in a tiny, unattended room that holds the knowledge of many decades of medical research in Malta. It was in this laboratory in 1905 that physician and archaeologist Sir Themistocles Zammit discovered the Mediterranean strain of Brucellosis, also known as Bang’s disease, Crimean fever, Gibraltar fever, Maltese fever, Mediterranean fever, rock fever, or undulant fever.

What is the connection between Melkonyan’s grandmother and Sir Zammit’s research? Written by Ira Melkonyan and Vedrana Klepica, with Katarina Pejović as the dramaturg, the 30 minute tour features a fascinating tale which intertwines personal narrative with concerns about medical practice in the 21st century, addressing diagnosis and medication in today’s society, particularly in the field of psychology. Directed by Jimmy Grima.

The rubberbodies collective thanks the Ministry of Health and the School of Performing Arts at the University of Malta. The show is supported by the Malta Arts Fund and the Science in the City festival. Further details can be obtained from the website.

Live from the Bolshoi theatre - Spartacus