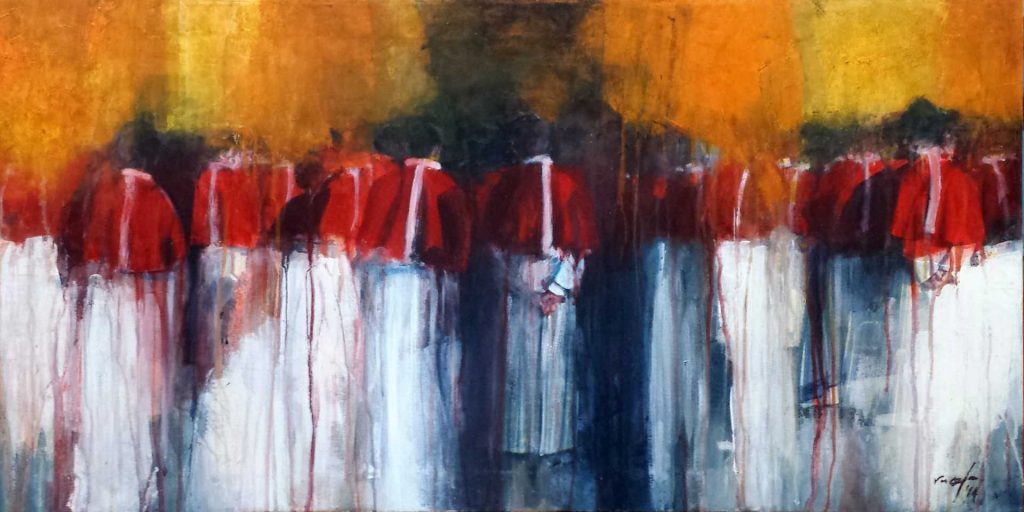 Artists often find their own ways of working and whilst some artists get to a blank canvas and let their expressions out, others find the need of dedicating much more time for research. Rupert Cefai is a creative all-rounder. I say this because Rupert is a cartoonist (known as Bertoons), he’s an artist painter, was an interior designer. Whichever project he works on, research is his priority and, perhaps, the skill that leads to his success.

Following 14 years as a freelance interior designer, Rupert only shifted from designing to painting in 2005. Since then, he has participated in numerous solo and collective art exhibitions, locally and abroad, that are mainly built on every day human experiences, the built environment, literature and music. Whatever the topic, he wants to project an image that gives out a particular message. His latest collection, ‘Tiers of Truths’, is one example of those based on real life events, even though those realities are what allowed him to create fiction, which alters how we view reality. Just like his fascination with both realism and abstraction, fiction and reality overlap and out of this, a multi layered truth emerges, as does the title ‘’There is no truth. There is only perception’’ by Gustave Flaubert. Some of this collection were exhibited at the Framers Gallery in London in 2012 and others, in Malta, in 2013. Both were followed with great success.

Success followed suit after spending long working hours on his artworks even though most of his time is spent on maintaining and updating his own websites, researching on projects he is working on at the time, marketing and dealing with art galleries. Rupert Cefai, like most artists, followed his passion and went through quite a few challenges, learning that all this administration work is just as important as working on his paintings. Working hard is one of his prerequisites to success but that comes with breaking some rules and although being an artist has its ups and downs, doing it with a passion is what allows him to do it at his best. This was what he learnt from Alfred Chircop when taking on art tuition under his guidance and through Harry Alden, he learnt that knowing your media and tools are just as important as knowing how to paint. Rupert’s favourite tools are palette knives, trowels and scrapers and large brushes and when it comes to the mediums, he uses oil paints, acrylics, inks and watercolours, according to the consistency needed in order to create the right balance in his artworks.

To see and learn more about Rupert Cefai and his artworks, you may visit http://www.rupertcefai.com. The artworks are there to give you the possibility of seeing everyday things in a new perspective, through a different sensory output.

The enigmatic work of Adrian Abela

The Ode of Llewellyn