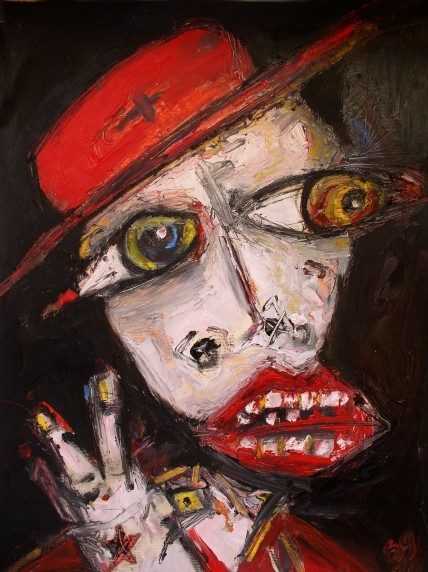 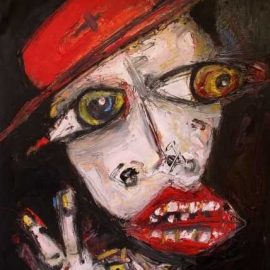 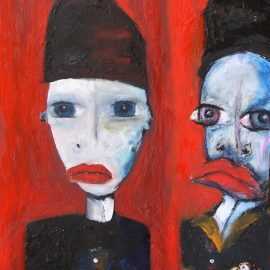 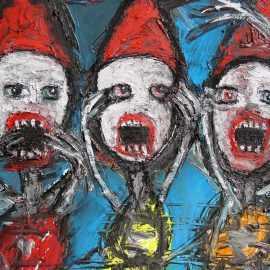 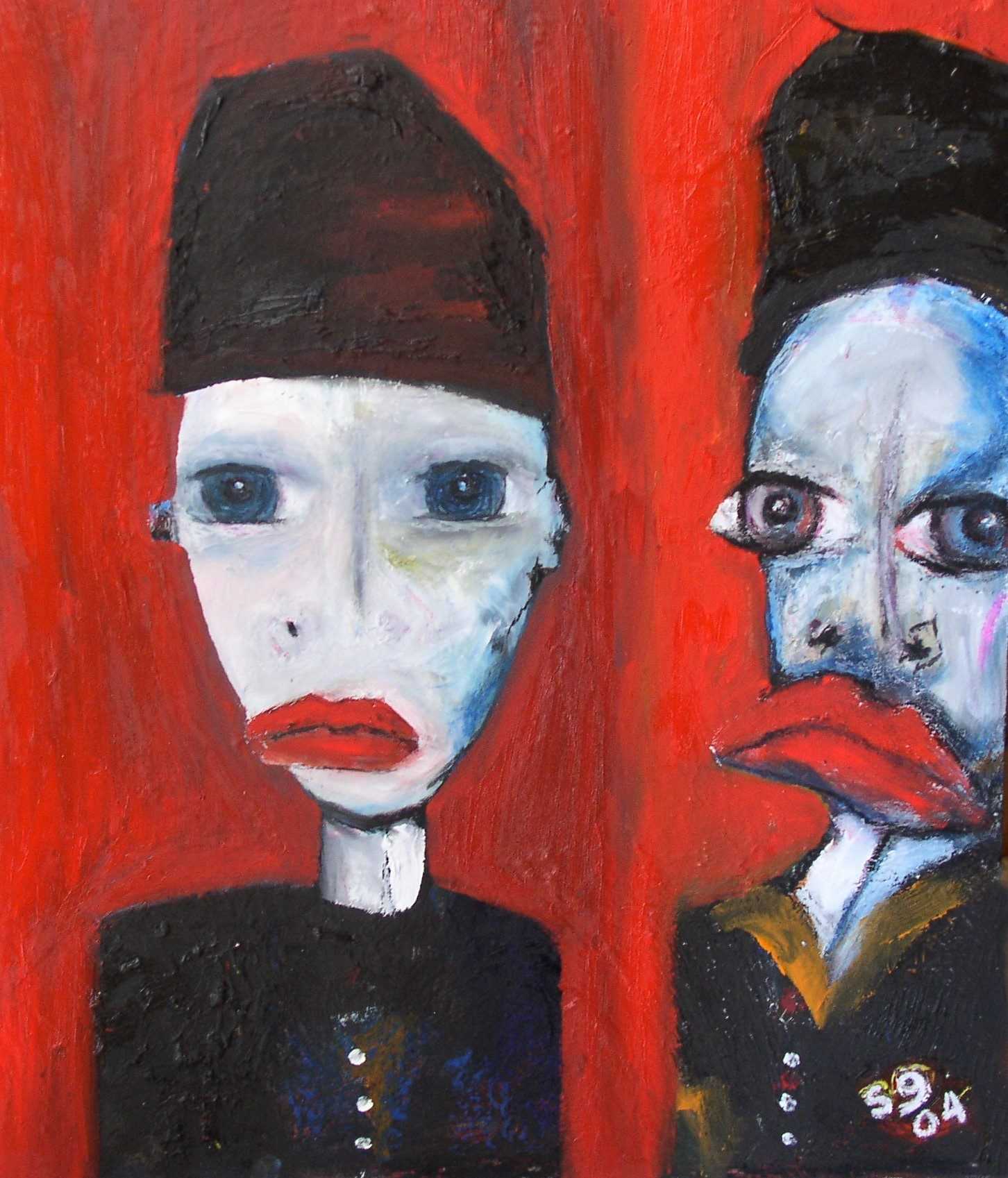 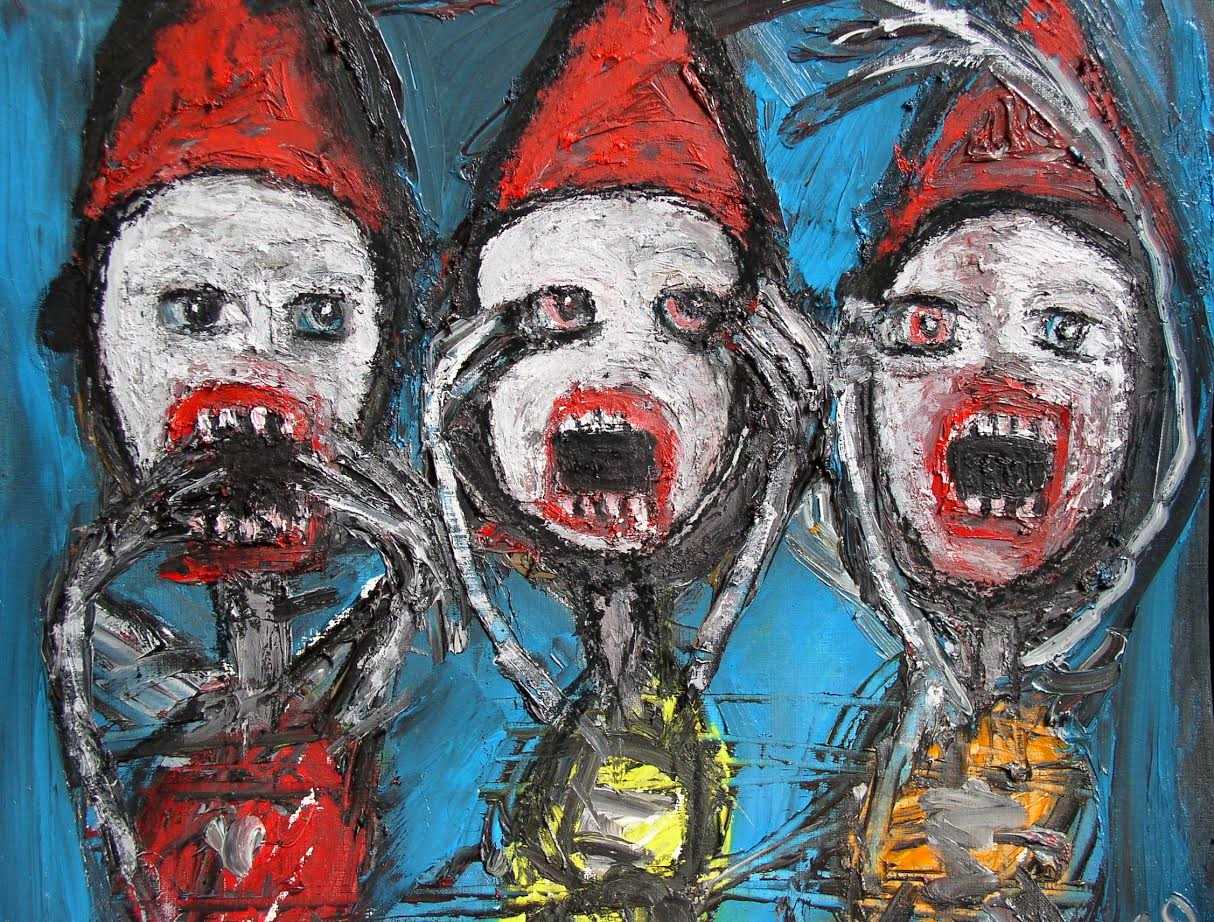 How did you get started?
I really couldn’t tell. I always doodled and tried to sketch stuff. Then I started using paints when I could afford them and things changed….a lot. I was an adult by then.

What genre do you consider your work to be?
No idea really. People and the press have described it as ‘naive’ or ‘outside art’. I’m not so knowledgeable of the art word or art genres myself to be honest, so I really wouldn’t know. I’d like to think it ‘reeks’ of me.

Describe your work in less than 10 words.
Borne out of necessity, irritates, pains, or gratifies.

Where was your first exhibition held?
A collective held at Gallery Last Touch in Mosta.

How long have you been painting?
A long time, but painting ‘painting’, something or other ‘recognisable’, some 10 years now.

Which is your favourite from among your own artworks?
I seem to have a string of them that change. But ‘Three White Scum’ from quite a few years is one I remember well. It was acquired by the Museum of Fine Arts years ago. It is probably gathering dust in a very mouldy place.

Whose artist’s work are you most inspired by?
I wouldn’t know because I do not engage so much with the art world. I do, though, like the work of random, largely unknown artists I happen to bump into when I travel. Many may be selling their work on the streets.

If you weren’t an artist, what would you be?
I am in fact many other things already.

What is the epitome of happiness for you?
Peace and love, inside and out.

What are you working on at the moment?
I can’t tell you because I’m still trying to figure out what it is I am trying to do. Much of what I do can be rather accidental.

Are you a morning person or do you come alive at night?
Somewhere in between, round 11.30a.m.

How many coffees a day? Don’t embellish.
Around 4.

Sundays can be very productive for some and very unproductive for others. How do you spend yours?
My week is rather unstructured and so is my work (an academic). Sundays can be Mondays for ‘normal’ human beings. Generally, though, they involve chill time too.

Wine and cheese. Yes or no?
No.

If you were given a million euros, what would you indulge yourself with?
I wouldn’t know what to do with them. I’ll probably give it to others to indulge in on my behalf, as long as it is not spent on things of indulgence but things of necessity.

The time there’s a favourite place, is the time that life becomes a boring carbon copy existence.