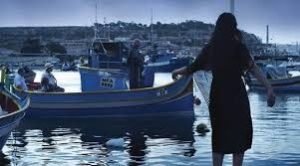 Hope is the only thing that keeps us afloat, even in the most desperate of times, and Simshar, a film inspired by the ill-fated Simshar fishing trip in 2008, pays tribute to that truth. It tells the story of a fisherman from Marsaxlokk by the name of Simon Bugeja (played by award-winning Tunisian actor Lotfi Abdelli), whose journey at sea costs him the precious lives of his son, father and friend.

Written and directed by Rebecca Cremona, Simshar taps into the human element of loss and the intense struggle for survival against a contemporary reality of illegal immigration around and within Maltese borders. The local preparations for Marsaxlokk feast, and the casual, romantic scenes of water lapping softly against the hulls of the boats that rested along the shoreline, seem trivial compared to the turmoil that Simon and his crew are facing.

When ‘Simshar’ explodes in open water, Simon is torn away from his father, Karmenu, acted handsomely by Jimi Busuttil, then Moussa (Sékouba Doucouré), the immigrant he employed for the purposes of this journey, and lastly, and most painstakingly, his 11-year-old son Theo (Adrian Farrugia), whose body was never found. This is despite the rescue efforts of John, the AFM lieutenant – remarkably played by Chrysander Agius in an unlikely transformation from his usual comedy roles – and Sharin (Claire Agius), Theo’s grief-stricken mother. Only Simon survived.

For its deep emotional and cultural resonance, the film, which will be shown at Embassy (Valletta) and Empire Cinemas (Bugibba) from Wednesday 30th April onwards, is likely to be one of the most highly-anticipated films in Malta this year.

Share a bit of Andean culture from Peru and Bolivia