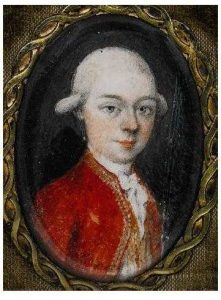 Sotheby’s will sell a rare portrait miniature of Mozart in London on 20 November 2014. The portrait, given by the composer to his cousin Maria Anna Thekla Mozart (the Bäsle) in exchange for one from her, captures the twenty-one year old Mozart at a key moment in his life, both artistic and personal. Mozart’s present to Maria Anna is referred to several times in the series of letters he wrote to her. An enduring token of the fleeting amorous attachment between the composer and his first love, and most probably worn as a locket, the painting will be the centrepiece of Sotheby’s Music, Continental and Russian Books and Manuscripts sale, carrying an estimate of £200,000-300,000. The miniature, which has seldom been seen in colour, is being offered for sale by descendants of Maria Anna’s family.

Dr Stephen Roe, Sotheby’s Worldwide Head of Books & Manuscripts, commented: “One of only two authentic paintings of Mozart remaining in private hands and one of only a dozen or so authentic paintings and drawings of the composer, this object’s significance is virtually unparalleled. What is particularly exciting is that the portrait has never been reproduced in colour in the standard Mozart literature, and it is only now that the miniature’s special qualities can be more widely appreciated. Mozart’s features come as a revelation when viewed in the flesh; the detail in the face is remarkable, formed by the tiniest dots of gouache applied with the utmost precision and delicacy, and a marvellous luminosity pervades the entire image. The artist, though unknown, has caught the essence of the composer.”

The portrait, painted by an anonymous artist in 1777 and measuring about 4cm in height, is distinguished by a touching simplicity and freshness. Mozart, wearing a red coat and with his fine blond hair powdered and fashionably tied with a large black bow, gazes directly at the viewer with a playful and open expression. It dates from the early part of the momentous Mannheim – Paris journey (September 1777 to January 1779), during which Mozart composed the E-minor Violin Sonata K. 304 and the A-minor Piano Sonata K.310.

A two-week stay in Augsburg in October 1777 had re-acquainted Mozart with his eighteen-year old cousin, the only daughter of Mozart’s uncle, the bookbinder Franz Aloys Mozart. With her, Mozart struck up a playful, intimate friendship which found lasting expression in a celebrated series of nine letters written between 31 October 1777 and 23 October 1781. In these renowned Bäsle-Briefe, Mozart exhibits a scatological humour amid brilliant, scurrilous flights of verbal fantasy that have variously amused, disgusted and perplexed posterity.

Their correspondence reveals that the composer had requested a portrait of Maria Anna, and she one of him. This exchange of portraits did not herald a lasting attachment. Mozart fell deeply, and unrequitedly, in love with Aloysia Weber in Mannheim. Though there are reports that in later life Maria Anna spoke little and then only reluctantly about her relationship with Mozart, what is certain is that she treasured the portrait given to her by her cousin, bequeathing it ultimately to a family member on her death at the age of 82 in 1841.

Next Article
0
Monique Chambers October 6, 2014
No Comments Yet