With a string of international shoots cancelled around the world, and finding himself at home in lockdown, photographer Mark Nicholson decided to make use of the time by experimenting with creative techniques and ideas to capture the unusually clear skies of this extraordinary spring. The result is a series of stunning ‘Star Trail’ images which beautifully capture the luminosity of clear, unpolluted skies devoid of airline vapour trail, traffic or light pollution.

“I travel a lot for work overseas, photographing superyachts, private jets, houses and hotels but suddenly my world, like so many people, was put on an abrupt hold” explains Mark who lives in rural Oxfordshire. “The lack of aircraft in the sky meant photographing a star trail was possible, and I started by experimenting in my own back garden, the fields around the village and in the churchyard.” 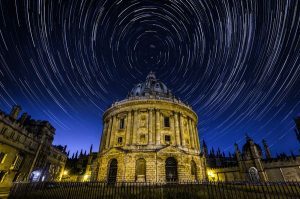 The dark clear nights provided an opportunity to notice the wildlife and natural world during the dead of night, offering an evocative and memorable experience for Mark who also encouraged his teenage children to experience the unusual night time tranquillity of nature in its most undisturbed state. He also ventured into a deserted and eerie Oxford which had ‘an almost apocalyptic’ atmosphere in the middle of lockdown, to capture the iconic university landmark of the Radcliffe Camera.

To achieve these dramatic results, Mark worked out precisely where the North Star lay (given that the earth effectively rotates on its axis), and then allowed around two hours exposure to capture the earth’s rotation which results in the stars creating a trail that the camera tracks and records. Mark says the development of the technique and the dramatic results has provided a “wonderful distraction” during isolation and as the slow return to some kind of normality and regular work schedule emerges, he intends to continue to experiment and is available for individual Star Trail commissions. 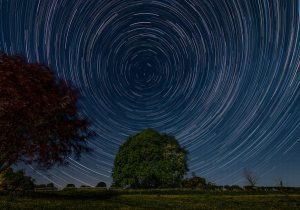 Mark Nicholson is an acclaimed international photographer, and his work has been published in numerous books and magazines. His client list includes interior designers, hotel and property developers, architects, airlines as well as work for the Royal family and celebrity clients. Based in London where he has a studio in Notting Hill he is often to be found shooting in Africa, the USA, Caribbean and Europe.

Moving to the UK? Here's some tax info