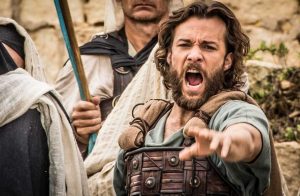 For those who have an appetite for films and TV series with biblical musings comes Saul: The Journey to Damascus, complete with all the semi-necessary epic tones of valiant warriors of the Christian faith – just in time for Easter.

Set to première worldwide on Wednesday, April 16th at the Eden Cinemas, the Maltese/Canadian film production, directed by Mario Philip Azzopardi, chronicles the conversion of Saul, marking his journey from butcher to leader of the faith. Played by Kyle Schmid, whose blue eyes have also made an appearance on none other than Being Human and Lost Girl, Saul’s controversial trajectory begins with the stoning of a man whose last words whispered forgiveness, an event which starts to haunt his every waking moment. As he journeys to Damascus, a sandstorm hits and lands him into a period of acute blindness. A miracle ensues, and he starts seeing the followers of the Nazarene as the true believers beholding the true faith. This permits him to escape his blind faith in the teachings of the Temple that is led by Caiaphas (John Rhys-Davies, probably best known for his performance of everyone’s favorite dwarf, Gimli, in The Lord of the Rings).

A Night For Life