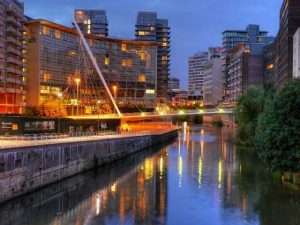 So, you’re going to a city that is notable for its culture, scientific and engineering output, social impact, sports clubs and transport connections.

Let’s take a look at the transport connections. Manchester provides bus, train and tram. The Metroshuttle bus is free of charge. Plus you easily get around by bike as the area lacks of hills.

The University of Manchester has a city-centre campus, just as the Manchester Metropolitan University does (which has also sites in south Manchester, Crewe and Alsager). The campus of the University of Salford is in Salford, but only one mile from the city centre. You see – you’ll be situated quite well.

In the city centre of Manchester over 400 pubs, clubs and cafés are located. Many bands started their career in one of those many places, as Manchester is widely known for its music scene. The more classical-interested should go to Bridgewater Hall. It houses the Royal Exchange Theatre Company, BBC Philharmonic Orchestra and the Hallé Orchestra.

The Lowry Centre on the waterside at Salford Quays, is a special place, where history and art come together. It consists of an arts centre and theatres, but also the Imperial War Museum North.

And in case you’re a lover of great movies, you might want to go to the Cornerhouse. It provides 3 screens, a café and a gallery for your best experience.

Manchester also holds the famous Manchester Pride every August, since it has its own gay village/ community (mostly in Canal Street). And while speaking of communities: the city accommodates one of the largest Chinatowns in Britain as well.

For going out after an exhausting day of studies, it’s said that the „seek and ye shall find“ ethos is well worth adhering to. For Underground music, try the Music Box. Back from Hell club plays Rock music all night long. Glamorous clubbing with Funk and House music is guaranteed in Venus, while the most hyped club is Sankey’s.

As you may know, the city hosts two great football clubs playing in the Premier League: Manchester United and Manchester City. Also the Lancashire County Cricket Club is based there. So if you’re a fan or planning to become one, this city is more than the right place.

Even the sports fanatic himself has plenty of opportunities to indulge in his favourite sport. For instance, try the National Cycling Centre, Manchester Aquatics Center, the countrie’s largest martial arts club or other great sporting facilities who offer the usual but nonetheless amazing sports like football, cricket or rugby.

The city centre of Manchester is a hot spot for shopping for the whole region. The extensive shopping area provides high street stores at Trafford Centre, where you should definitely check the website for student offers. Designer stores are located in King Street and independent, bohemian stores or boutiques in the Northern Quarter. For the large and modern shopping malls, cast a glance at Manchester Arndale and Exchange Square.

While you find plenty of retail stores everywhere, don’t forget to keep your eyes open for the many single store businesses, which offer products and services with a typically Mancunian touch. Just take a look around and make some new experiences.

For the time you’re living in Manchester, be open and try to soak in every experience you are able to get – Regarding the achievements of this city, Manchester will inspire you every day.

Student Guide to Bristol - the place where the music's at!

Student Guide to London - the city of opportunities