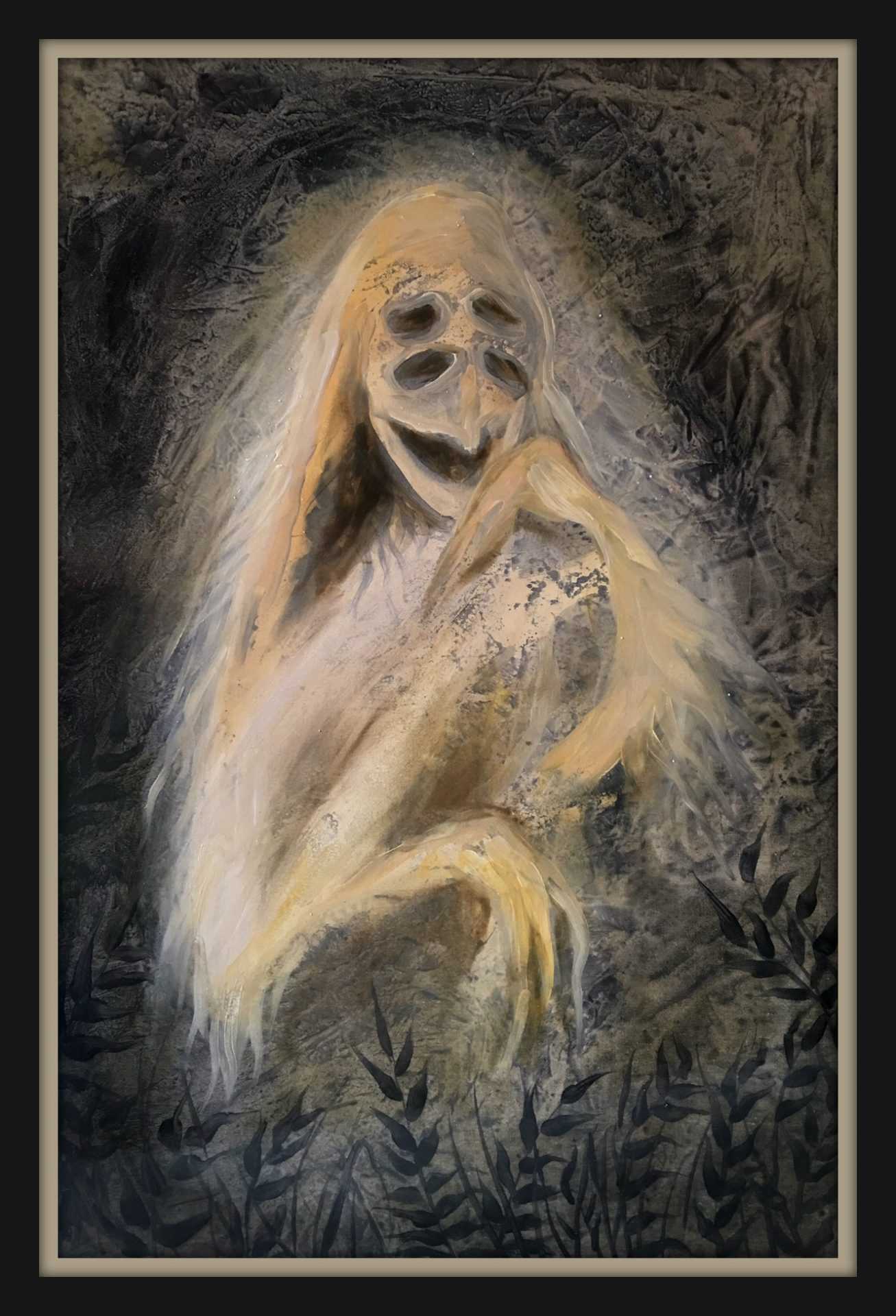 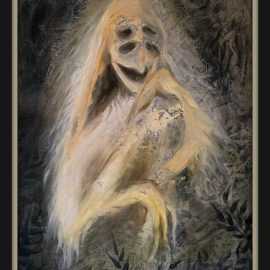 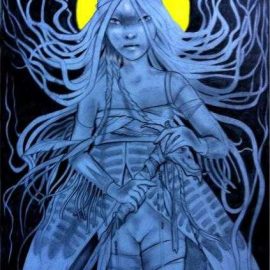 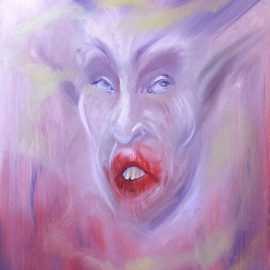 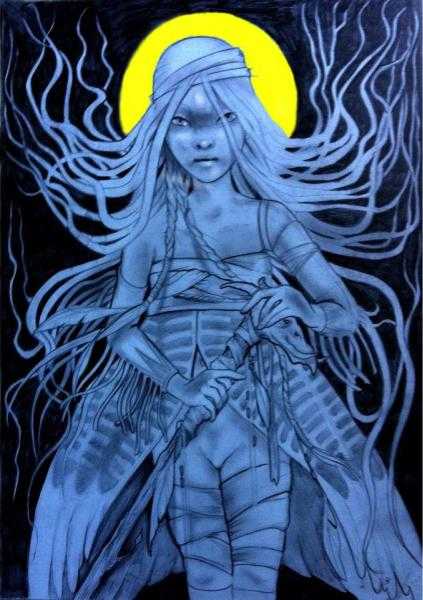 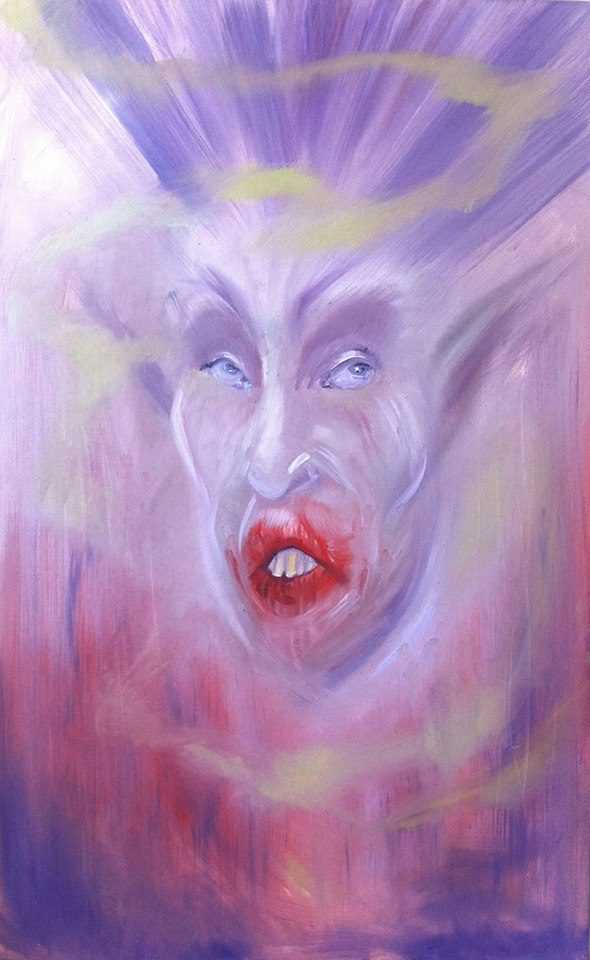 Susan Waitt is an American expat living the life in beautiful Malta.  She is a largely self-taught artist who has produced commercial book illustrations for both Disney and Fisher Price through Langley Studios in Massachusetts, USA as well as freelance work for Grolier and Gordon Fraser. Susan has also executed fine art trompe l’oeil murals, bibelots, cartouches and special effects for private clients through her business, Song of the Brush.

Susan has also create outsized theatre scrims and sets for television, theatre and exhibitions in US and Malta. She is concentrating on studio work, a luxury that escaped her for most of her professional life.
How did you get started?

I have been making images and markings from the earliest years of my life, so the question seems a bit remote.  Mine was a raw, strong, natural talent. It did not need to be coaxed. I drew obsessively. I spent many hours devouring art books and practising drawing perfect renditions of all my favourite childhood Disney and Warner Bros. cartoon characters. I was writing and illustrating home-made books from age 8. My first book was a re-imagined version of Disney’s Bambi. Adults were commissioning professional work – mostly billboards and posters – from me since I was about 11 years old. I have always worked in art in some form or fashion.

Fantastic Art…  or perhaps even Interdimensional or Portal Art.  I am just as comfortable and proficient producing classical /fantastical / visionary scenes and even decorative elements as I am indulging in my not-so-secret fascination for cute and creepy Pop Surreal, Pop Gothic and Outsider Art. Ideally, I’d like to move even further away from representational art as I explore spiritual themes.

Describe your work in less than 10 words.

On the walls of my childhood home.
How long have you been practising your art?

In dog years, 8 years.  In human time, around   29,355,678 minutes. In poetic time, ere these long five decades….
Which is your favourite from among your own artworks?

I have a revolving door of favourites. I am quite fickle.

Whose artist’s work are you most inspired by?

My inspiration proceeds primarily from my own pronounced and ever roiling imagination. But I shall name here just some of diverse influences – from Disney to Hieronymus Bosch, R. Crumb to William Blake, Mark Ryden to Gustave Moreau, Leonor Fini to Howard Pyle, Ernst Fuchs to Agostino Arrivabene. The works of many Visionary, Surrealist, Shamanic, Symbolist and Fantastic Realist artists have all, at one point or another, had a potent effect on my iconography and choice of subject matter.

Parapsychologist, Post-Quantum Theorist, Chaos Magician, Film Star.  Oh, wait… I already indulge in these, albeit in armchair fashion. I have actually been a commercial print model, a stage actress and a television host, so there’s that. As an artist – or anything else – I don’t ever want to have to make decisions about who or what I am in terms of a role defined by others.

What is the epitome of happiness for you?

Absolute freedom from soul-eating schedules, administravia, officialdom and inane regulations.  I hate control grids of any sort.   Also, I’d be thrilled to live in a society that observed silence in the public square.  I am a sonic sensitive and I abhor the ubiquitous / iniquitous wall-to-wall music in shops and restaurants. The imposition of blaring, thumping party music, everywhere and every when   is a form of mind control, IMHO.  I regularly ask my hairdresser and dentist to turn off the music. I ask restaurants to change out their driving beats for something more relaxing.  I do not paint to music.

What are you working on at the moment?

My upcoming (Oct – Nov 2016) solo exhibition Night Gallery: The Uncanny and The Sublime at The Fortress Builders in Valletta will depict the un-nerving, disturbing and creepy images of murky worlds that lie just below the reach of reason.  I’ve also been selected to produce an art installation for the Carmelite Priory Medina’s group exhibition in 2017 celebrating the 450th birth anniversary of mystic Saint Mary Magdalen de’ Pazzi.   In September 2017 the Cittadella Cultural Centre in Victoria, Gozo will be featuring my Knights in White Satin solo exhibition loosely inspired by the Knights of Malta as well as the knights and maidens of the Pre-Raphaelite Brotherhood and Sisterhood.

Are you a morning person or do you come alive at night?

Morning and night have become meaningless terms for me. I mix them up pretty regularly. I suppose I work mostly intently at night. I will, however, happily eat breakfast at any hour of the day. Breakfast is my favourite meal.

How many coffees a day? Don’t embellish.

A large pot-full. I don’t know how many cups that is, however. Maybe 4-5. I often take coffee naps. Yes, coffee naps are “a thing”.

First, I awaken at the crack of noon. I make coffee.  I pray for rain so I won’t have to go out and enjoy the day. I check to see if anyone I know died during the night. If not , I check my email,  Facebook , world news … and then begin to plan the day’s activities / work. I don’t like rigid schedules.

Wine and cheese. Yes or no?
Tap water and cheese rinds if I haven’t been shopping.

If you were given a million euro, what would you indulge yourself with?

I’d hire a cook. I once owned and operated both a New York Times star-rated restaurant and an award winning inn in the US. I’d like to be relieved of shopping and preparing food at this point. Cooking was a great creative outlet for many years, and I was expert at it, but now it’s just drudgery – since there are other things I’d rather be doing. Too, my favourite charities have been World Vision and Heifer. Nowadays, however, I contribute to the worthy efforts of friends, especially those who are brilliant and talented or young and unmentored, but have been affected adversely – even catastrophically – by the vagaries of the global economy. A million euro is still not really enough to make a big difference, unfortunately.

The Universe next door.