It’s panto season, and this time we’re going below the surface! Here, we catch up with Tezara Saliba, who will be playing dashing Prince Rubinu in FM Theatre’s The Little Mermaid: The Panto Under the Sea at Teatru Manoel.

Tezara Saliba likes to keep herself busy. She is a full-time drama teacher, a radio DJ, a singer and an actress. And as if all that wasn’t enough, this Christmas she will also be playing the part of Prince Rubinu in FM Theatre Productions’ pantomime The Little Mermaid at Teatru Manoel. 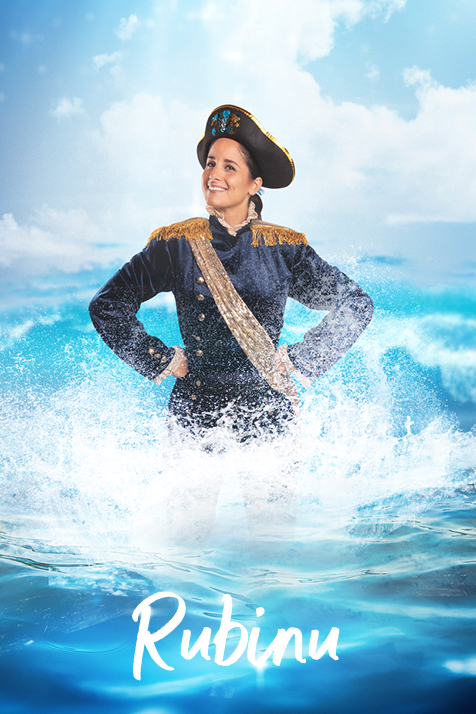 Asked how she manages to juggle all her different commitments, Tezara explains that rehearsals for the panto start ramping up just as wedding season starts winding down, which is great timing since she is a wedding singer too. “Having said that, I still need to plan my own schedule of things I need to get done before I head to rehearsals, including filming adverts, sorting out costumes for my school kids or fitting in a workout,” she says, adding that she also needs to take care of “basic stuff such as buying groceries and cooking”. As they say, if you want something done, pick a busy person.

Tezara’s role this year is slightly different from the ones she has performed in the past, since Rubinu is a man. “Since it’s a panto I’m not feeling like there is much need to ‘man him up’ so to speak,” she says. “Traditionally, it’s a woman who plays the lead male role in a panto – as principal boy – and it’s always quite evident through certain lines and the body language required that it’s a woman in male-looking clothing. I am enjoying this role even more since my love interest, Ariel, is being played by Nicole Cassar, one of my closest friends.”

But there is more than love and laughter to this show; Prince Rubinu will also be going on an adventure, looking for his long-lost father, King Barbakannella. And although The Little Mermaid is based on the well-known fairytale by Hans Christian Anderson, and most of us are even more familiar with Disney’s version of it, those who understand the panto format will know to expect a different take on the story. In fact, pantomimes always refer heavily to local culture, which is already apparent from some characters’ names, like Dame Bormaljotta and Bosun Cikku Flieles. Those present can also expect ‘inside’ jokes that only locals will truly understand, as well as humour that is both fun for children and even more so for adults when subtle double entendres are employed.

But back to Tezara; we’re curious which prince she would rather meet in real life: Disney’s Prince Eric, who is slightly slow on the uptake when it comes to recognising Ariel as his soulmate, or Prince Rubinu, who is sure to be more fun-loving? “I think I would like to meet Prince Harry in all honesty!” she laughs. “Joking apart, both princes have that sense of adventure which I like. Eric has dreamier hair, so I’d like to chat with him about how he manages to maintain it.”

And what about the experience of panto itself? Why should families go to see The Little Mermaid, instead of cosying up at home with mulled wine and mince pies? “It’s a great night out!” Tezara exclaims, “and for most people, it is the only time they get to enjoy Teatru Manoel, which make it even even more special for us on stage. Plus, there are cool upbeat songs and lots of banter for audiences to enjoy. I think the energy is great too – we are all good friends off-stage and that chemistry really comes through in our performance. There really is nothing better than the feel-good fun of a Christmas panto.”