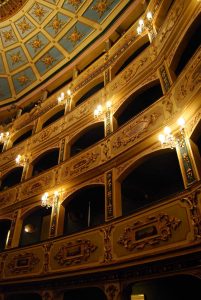 Teatru Manoel is proud to announce that it has been awarded a Certificate of Excellence from Tripadvisor for the second year running.
Tripadvisor is the world’s largest travel site which allows travelers to rate and post candid reviews and opinions about hotels, restaurants and attractions.

The reviews commented very favourably on all aspects of the Manoel from the uniqueness of its historic baroque interior to specific performances as well as the audio tour of the Theatre. Although there are no performances over the summer months the Theatre is still open to tour.

Since May 2013, the tour has been re-designed. Although group guided tours are still available, visitors carry an audio handheld guide (available in various languages) which directs them through the small Museum (next door to the main entrance), which provides a historical introduction to the building before entering the baroque auditorium.

With cultural tourism being one of the fastest growing sectors, testimonials such as these are essential to reinforce Malta’s position as a cultural destination on the global map.   Ray Attard, Teatru Manoel’s CEO stated, “Being such a historic building, as well as one of the oldest working theatres in the world, with an eclectic performance programme ranging from orchestral concerts, recitals and opera to drama, dance and educational events, Teatru Manoel is undoubtedly extending the affection that locals already have for it beyond Malta’s borders.”

Airline food at it's best