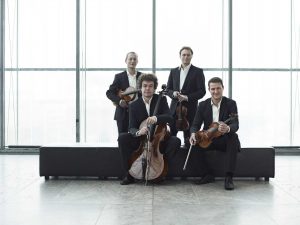 Teatru Manoel is proud to present the return of the Leipzig Quartet for the second two recitals of the series of concerts featuring Beethoven’s string quartets. The two different recitals will take place on Monday 1st and Tuesday 2nd December at 8pm.

Founded in 1988, the Leipzig String Quartet is now widely acclaimed as one of the most exciting string quartets on the international chamber music scene. The “Neue Züricher Zeitung” has described the ensemble as “one of the towering and most versatile quartets of our time.” Teatru Manoel’s CEO, Ray Attard stated that, “We are extremely privileged to have added such prestigious artists to our list of performers at our national theatre. The plan is to have the Leipzig Quartet present all of Beethoven’s string quartets over three seasons”.

In 2002 “The New York Times” wrote “if there is a Leipzig sound, this is it!” Three of its members were first chairs in the famous Gewandhaus Orchestra of Leipzig. After studies with Gerhard Bosse, the Amadeus quartet, Hatto Beyerle and Walter Levin, the quartet went on to win numerous prizes and awards, such as the 1991 International ARD Munich competition, and the Busch and Siemens prizes.

Today, the Leipzig String Quartet performs extensively throughout Europe, the Middle East, Africa, Central and South America, Australia, and Asia, as well as at many of the major festivals.

The quartet’s almost 90 recordings, spanning from Mozart to Cage and including the complete works of Brahms, Mozart, Mendelssohn Bartholdy, Schubert and the complete Second Viennese School have been met with international critical acclaim. They have brought the group such recognition as the “Diapason d’Or” and “Premios-CD-Compact” awards, two nominations for the “Cannes Classical Award” and the 1999, 2000, 2003, 2008 and 2012 “ECHO-Klassik” awards. Their recording of the complete Schubert quartet literature, a first, are considered by many the most important release for the Schubert year 1997.

Each of the Leipzig Quartet recitals at Teatru Manoel includes a different programme; the Monday 1st December features String Quartets op.18/2; op.59/3 and op.135 and theTuesday 2nd December features String Quartets op.18/5; op.133 (Great Fugue) and op.127. Each concert starts at 8.00pm and is preceded by a pre-concert talk for ticket holders at 7.15pm.

Music and Art at The Oratory