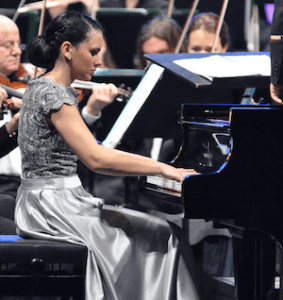 “The festival will open with a bang with Manuel de Falla’s most popular work El Amor Brujo (Love the Magician) under the baton of the French conductor Raoul Lay and Ensemble Télémaque from Marseille, with Maltese Mezzo-soprano Clare Ghigo as soloist. The programme will also consist of Charles Ives’ enigmatic Unanswered question and L’oracion del Torero by Turina. For the opening night the Télémaque will be joined by Maltese musicians violinist Maria Conrad and her string quartet, clarinet players Godfrey Mifsud and Lino Pirotta, as well as percussionist Daniel Cauchi.

2013 marks an important date in the history of music; Richard Wagner, was born 200 years ago and Igor Stravinsky’s Rite of Spring was premiered at the Theatre des Champs Elysées a hundred years ago. The festival will commemorate the latter event with the two-piano version of Stravinsky’s radical work performed by the enfant terrible of Maltese pianists Charlene Farrugia and the Italian virtuoso Nazareno Ferruggio on April 3.  To commemorate Wagner’s bicentenary birth anniversary the RE: Orchestra from Rotterdam returns to Malta and will be perform Siegfried’s Idyll on the closing evening together with Respighi’s Il Tramonto and Shostakovich’s fiery Chamber symphony under the baton of Roberto Beltran-Zavala. Beltran-Zavala will also be conducting his orchestra on April 4 with a programme consisting of Vivaldi, Martinu and the world premiere of up-and-coming Dutch composer Marlijn Helder;  a dynamic double concerto for violin and cello.On Friday 5 April, the Paris-based Elixir piano quartet will perform Brahm’s, Faure’s and Fiorini’s Piano quartets. Local artists and duos will be giving recitals at the Sala Isouard every day at 12:30 and 19:00.

The 7th edition of the ISOFestival is mainly sponsored by the Ministry of Finance, and generously supported by the Teatru Manoel, Excelsior Hotel, Microsoft, Malta Stock Exchange, David Griscti and Associates, Malta Tourism Authority, Embassy of France, Phoenicia Hotel and Fenêtre Project.

Sale - away to another land