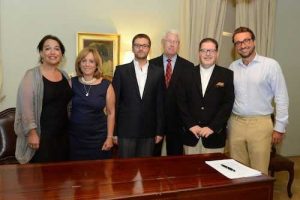 The ADRC Trust has signed an agreement to support Teatru Manoel’s Toi Toi Education Programme over three years including the Toi Toi element of the Valletta International Baroque Festival 2014.   The Trust was established by the Chalmers family in memory of their son and brother Alistair David Robert Chalmers, who died in 2012, aged just 31. The ADRC Trust seeks to support causes that were important to Alistair Chalmers – encouraging talent in the young, Hispanic studies, the visual and performing arts, and the heritage and environment of Malta and Scotland.

The Board of Protectors of the Trust identified Teatru Manoel as a beneficiary in its efforts to make music (classical and otherwise) more accessible to young children, and to encourage young talent in the performing arts.

The signing of the agreement coincides with the recent success of Teatru Manoel Youth Theatre’s performance of CLUB during the Ziguzajg Arts Festival as well as the first public performance of the Teatru Manoel Youth Opera (TMYO) on 13th December; the newest Toi Toi venture. TMYO’s primary purpose is to offer operatic experience to those who have a serious aim of pursuing careers in Opera performance and are at the start of their careers.

Dr. Michael Grech, Chairman of Teatru Manoel, expressed his gratitude to the Chalmers’ family for their generous support and highlighted the significance of such patronage. He added how vital this is for the expansion of cultural education and outreach which the Theatre is continually striving to develop.   Ray Attard, CEO of Teatru Manoel, added his thanks to the ADRC Trust and emphasized the importance of external partnerships which help Teatru Manoel fulfill its mandate as the country’s national theatre.

The agreement was signed on behalf of The ADRC Trust by Roderick and Mary Rose Chalmers, Alistair’s parents, in the presence of their son Nicholas, and for Teatru Manoel by Michael Grech and Kenneth Zammit Tabona. Rosetta Debattista, who runs the Toi Toi Education programme was also present at the event.