The number of films on WWII is endless but it’s quite rare to see a film like The Aftermath tackling an unknown moment of history like this one. 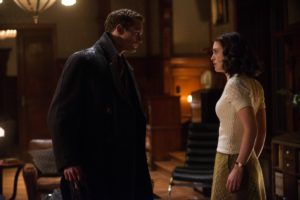 Postwar Germany, 1946. In the midst of Hamburg’s ruins Rachel Morgan, the wife of a soldier who’s in charge of rebuilding the city, joins him there. But she wasn’t prepared to live with the house’s former owner, a German widower and his troubled teenage daughter. It’s in this atmosphere that each other’s secrets will be revealed, between anger, grief and passion, a complex story will unfold in post-Nazi Germany.

After WWII, Germany was occupied by the 4 victorious nations who divided the country into two distinct states : one dependent on the Western bloc (Federal Republic of Germany) and the other one under Soviet influence (German Democratic Republic). The Allied peoples could therefore come back and settle and requisition the most luxurious German houses at their convenience. Unfortunately, this situation contrasted with the living conditions of German people, who discovered a country in ruins at the end of the war. Germany’s material and human damage were of an indescribable magnitude : bombings, fires… Everything had been destroyed. This is particularly well illustrated in The Aftermath, whose settings are surprisingly real, the human and structural misery is one of the first facetes of German history to be highlighted in the film. One year after the end of the war, the moment the film takes place, 14 million people are still homeless.

Alexander Skarsgard, who plays Stefan Lubert, the German widower who welcomes the English couple to his home, says he justly appreciated the nuance of the script: “I’ve read a lot of Second World War stories, and a lot of them are very black and white,” he explains. “It’s very much the Germans are all evil, and the Allied soldiers and civilians all good. The author will often throw in a token good guy on the German side to show that they’re not all bad. The Aftermath went much deeper. To see Hamburg in 1945, the devastation -half the city was levelled and feral kids were running around the streets desperately trying to find food- that misery is heartbreaking. It shows the horrors of war on both sides. It’s not clear cut, and it’s not about winners and losers. It felt like a very different insight into the post-Second World War period.“

Rhidian Brook, the author of the novel on which the film is adapted, was inspired by the story of his grandfather (Colonel Morgan) to write The Aftermath, who was one of the English officers dispatched to Germany to get the country back on its feet. Him and his family requisitioned a house but chose not to have its German owners evicted. The two families lived like this for five years, hence the nuance in Kent’s film, a movie that doesn’t appear as a blame on the German people but rather as a chapter of history that needs to be told.

In the ashes left by WWII, a love story will therefore be created between Rachel Morgan (Keira Knightley) and Stefan Lubert (Alexander Skarsgard), two beings drowned in their painful past and who’ll try to repair their mutual wounds. Keira Knightley gives us a performance full of emotions, torn between the ghosts that haunt her, her flailing couple and a lover with whom she can start all over again. But the most stunning performance remains Jason Clarke’s one, alias Lewis Morgan, who swings from desperate husband, grieving man to carrier of a universal tolerance message.

The Aftermath is above all a reflection on the human being, the headlining duo’s performances, Skarsgard and Knightley, prove it. How to overcome prejudices we have about others when they have hurt us so much ? Keira Knightley explains about her thoughts on The Aftermath “I didn’t know that there was an English occupation of Germany after the war, so I was really interested in the idea of how, when you’ve been enemies for so long, do you suddenly see people as people again, and not simply as evil and on the other side? »

The Aftermath is a story of renewal, of reconstruction, of values that are too often forgotten and of reminding us that the past marks people.