It’s not easy to summarize the life of the man who is still considered by many to be the greatest dancer in history, because his history was so similar to a novel. But that’s the challenge that director and actor Ralph Fiennes decided to take with his new film, a biopic of the ballet star Rudolf Nureyev with, in the spotlight, a dancer still unknown to the public : Oleg Ivenko.

How to encapsulate the complex and tortuous life of an exceptional dancer who is considered as the most famous of the 20th century in two hours ? Director Ralph Fiennes has decided to dedicate his new work to the star dancer, known as ” the White Crow “, a Russian nickname for those who were ” unusual, not like others “. Indeed, Nureyev was far from being an ordinary man. Born aboard the Trans-Siberian Railway in 1938 in a very poor environment, Rudolf Nureyev quickly fell in love with dance and it was at the age of 8 that this flamboyant dancer began his discipline. He then joined the Voganova Ballet Academy, where he met his mentor (Ralph Fiennes) and then the Kirov Ballet Company with which he made a journey to Paris, the same journey that made him famous to the whole world when he decided to seek political asylum and sack the KGB guards who were accompanying him.

It’s in this universe, in the middle of the Cold War, that The White Crow plunges us into the intricate life of a young Russian freedom-loving man. The role of Nureyev is portrayed by Oleg Ivenko, a young star dancer who takes his first steps in theatre in this biopic. It’s less his performance as an actor than the one as a dancer that surprises us, since he worked so hard to take Nureyev’s expressions and gestures. The film is also carried by incredible dance scenes that recall Nureyev’s talent but especially Ivenko’s one. The latter manages perfectly to capture the multiple facets of Nureyev, a man who was at the same time charming, intriguing, ambivalent, prisoner of his desires but also in love with a never-ending freedom. This resembling portrait was made possible thanks to Ralph Fiennes’ fabulous work as a director. 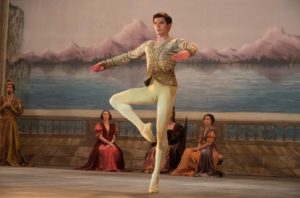 Indeed, Fiennes immerses us in Nureyev’s universe with small details. Through the work on language for example, the film can boast of being trilingual with a casting as much British, Russian as French. The Parisian part of the film is incredible, the reconstruction of the 60s’ Paris is truer than life. We also highlight the intelligent choice in the French casting with Raphael Personnaz (The Princesse of Montpensier) playing the role of dancer Pierre Lacotte, friend and confidant of Nureyev. But the one who disappoints us a little bit in The White Crow is Adèle Exarchopoulos (Blue is The Warmest Color) who used to perform much more emotionally and truthfully. Her interpretation of Clara Saint, friend and perhaps lover of Nureyev, sounds false and yet it’s a role that could have suited her perfectly.

The White Crow takes us into the world of a star dancer who wants to taste independence, propelled despite himself to the top of the news because of his desire for freedom. All he wanted was to dance where he wanted, when he wanted. When he danced at the Voganova Academy, he was told “Either you will be an extraordinary dancer, or the model of the failures, and more probably the model of the failures“. Rudolf Nureyev chose to be extraordinary, the one known as The White Crow.