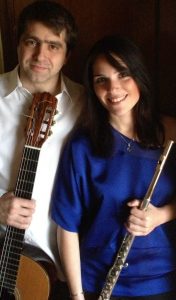 On Thursday 5th December at 8pm in Sala Isouard at Teatru Manoel, Maltese flautist Fiorella Camilleri and Italian guitarist Luca Lucini will merge music from the East and West into an exciting recital that will take the audience on an emotional journey through different times and musical styles.

The ‘Camilleri-Lucini’ Flute and Guitar Duo was born out of its members’ common passion for classical and world music. Since its formation in 2012, the duo has been building an ever-growing repertoire comprising original works and transcriptions.

Maltese born Fiorella Camilleri now occupies a full-time position as sub-principal flute and piccolo player with the Malta Philharmonic Orchestra, where she has played under the baton of Wayne Marshall, Peter Stark, Charles Olivieri-Monroe, David Campbell, Jonathan Butcher, and Brian Schembri. She features regularly as a soloist, and as a member of chamber-music ensembles alongside members of the orchestra and other soloists. In parallel to her classical music activities, Fiorella is an active player in the Maltese jazz and Latin scene. She has recently also started to commission new works for flute, and flute and guitar duo from several international composers. This has already yielded tangos, and a Concerto for flute, guitar, and orchestra.

Luca Lucini from Salo’, Italy, is a winner of several music competitions and features regularly as a solo and chamber-music guitarist and collaborates with top musicians such as the violinists Marco Fornaciari (international soloist and soloist of I Solisti Veneti) and Nobuhiko Asaeda (international soloist and ex-leader of the Tokyo City Philharmonic), and conductor Jose Luis Basso. His concerts in Europe and Asia have led to performances in the Tokyo City Philharmonic Orchestra chamber-music season, the Maggio Musicale Fiorentino season, the Torrechiara Festival, the Weekend Mozartiani in Ravello, the International Guitar Festivals in Parma and Friuli Venezia Giulia, and the Festival de Radio France.