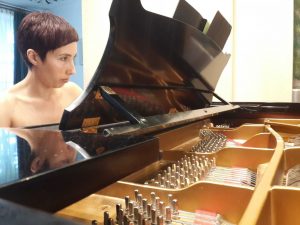 Teatru Manoel is presenting an exciting recital of 20th Century and Contemporary Music by one of Malta’s leading pianists, Tricia Dawn Williams, on Thursday 20th February in Sala Isouard at 8pm.

Williams specialises in music of this genre and over the years she has organised and participated in several recitals collaborating with composers, commissioning and premiering their works in Malta and internationally.  She is frequently invited to perform abroad, amongst others: the Béla Bartόk Memorial House in Budapest, the Festival International de Carthage in Tunisia and the John F. Kennedy Centre for the Performing Arts in Washington DC.  Her repertoire ranges from Béla Bartόk to today’s modern composers.

Each work will portray a different technique on the piano starting with Levaillant’s obsessional and sonorous etude that will hold you in a trance as the pianist alternates between very fast chords on both hands (imitating a drum technique)  and ending with Antosca’s piece for piano, computer processed piano sample and voice.

Bartόk’s Fourteen Bagatelles that were once considered too modern for the time they were written are the second work on the programme.  They will live up to the significance attributed to them by Bartók, who insisted that with the Bagatelles, he had at last created something entirely new. Next is Grech’s Rhapsoidía based on two pentatonic scales using two Greek folk-tunes, on which the whole composition is constructed.  In this work the composer embarks on a musical search for the roots of life, the ultimate source of all that is.  He conducts this universal search by means of an individual search for his own Mediterranean roots.  This work is in three sections, each representative of one of the three phases of life; i.e. birth, death and re-birth.

Zahra’s PAN the Goat-God is set in four movements. The music for this cycle is driven by hard rhythmic patterns which support complex motives and intricate melodic lines. The composition is also characterised by aggressive contrasts within the same movement which often surprise the listener as the music jolts forward in leaps and bounds.

Treat your loved one this Valentine's Day

Next Article
0
Monique Chambers February 13, 2014
No Comments Yet