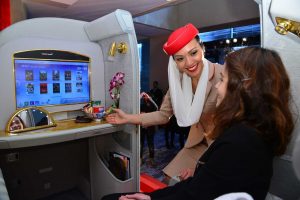 Emirates will begin a daily, non-stop service between Taipei and Dubai from 10th February 2014, establishing the first non-stop connection between Taipei and the Middle East. One of the world’s most dynamic airlines, Emirates has been expanding its global route network to provide customers with even more travel options.

Emirates will fly a Boeing 777-300ER on the Taipei route, equipped with eight luxurious private suites in First Class, 42 lie-flat seats in Business Class, and generous space for 304 passengers in Economy Class. Passengers can also look forward to gourmet cuisine in all classes, served by Emirates’ multinational cabin crew.

Emirates now operates services to 138 destinations in 78 countries from Dubai. Earlier this year Emirates launched services to Warsaw and Algiers, Haneda, Japan, Clark in the Philippines, the transatlantic Milan-New York route, Conakry, Sialkot in Pakistan and Kabul in Afghanistan.

Emirates will begin 2014 with the launch of services to Kiev, followed by Taipei and Boston (on 10th March) adding to their daily scheduled flights from Malta to Dubai.

Tides of a child