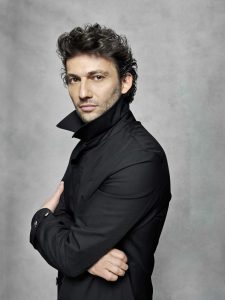 Broadcast live from London’s Royal Opera House on Thursday 29th January at 8:15pm is Umberto Giordano’s greatest opera, Andrea Chénier. With a string of successful productions for The Royal Opera, Scottish director David McVicar brings Giordano’s thrilling historical drama back to the Royal Opera House for the first time since 1985 in a stunning new production! Showing for one night only at the Eden Cinemas, the opera presents a fictionalised account of the last years of the Romantic French poet Andrea Chénier, who was then guillotined during the Reign of Terror in 1794.

Taking the starring role of Chénier, with its three marvellous arias, is Jonas Kaufmann, whilst Dutch Soprano Eva-Maria Westbroek sings the role of Chénier’s beloved Maddalena. Last but not least is Serbian baritone Željko Lučić starring as Carlo Gérard, the servant turned revolutionary who is Chénier’s rival for the love of Maddalena. Conductor Antonio Pappano adds his magic touch to this magnificent opera, together with the chorus and orchestra of the Royal Opera House.

Andrea Chénier is an opera which is celebrated for the lyrical music it offers. Enhancing this is the amplified sound, together with dimmed lighting in Eden Cinemas’ multipurpose theatre which provides a sense of authenticity, as though watching the opera from the Royal Opera House. Sure to be an unforgettable experience, the audience pays just a fraction of that charged overseas for theatre tickets.

Tickets for Andrea Chénier are priced at €23 per adult and a mere €10 for children aged 16 and under. A complimentary glass of wine will also be offered, together with complimentary parking and a 25% discount at Waterbiscuit upon presentation of a ticket.

This event is sponsored by 35 South and Waterbiscuit

For more information and to purchase tickets visit www.edenculture.com.mt.

Discover the secrets behind one of the world’s most enigmatic masterpieces!

0
Monique Chambers January 6, 2015
No Comments Yet