Under Milk Wood, the classic comedy by acclaimed Welsh poet and playwright Dylan Thomas, is soon to be performed in Malta by British company, Moonlight Theatre. Founded 20 years ago, the troupe started out staging ambitious open-air musical theatre productions in Wales, becoming an annual summer fixture on the regional theatre scene for a decade. indulge.com.mt spoke to Robert Orchard, who has organised what is
Moonlight’s first overseas tour and will also be on stage throughout the show.

Moonlight Theatre’s touring cast of 11 actors for Under Milk Wood mostly hail from Cardiff or Swansea – the ‘ugly lovely’ home town of Dylan Thomas, as he called it. The play’s director, John Rhys Thomas, lives there too and was a founder member and early chairman of the Dylan Thomas Society. The cast have something else in common too, something more distinctive, perhaps, as Robert told me between rehearsals:

“With one notable and very tall exception, we are what might delicately be described as an unusually mature cast: ranging in age from the mid-50s to mid-70s, but grey is the new black and that maturity actually brings with it a wealth of experience, both of life and of acting. We may be retired but we are certainly not retiring. The cast boasts decades of experience: lawyer, yoga teacher, musician, Oxford professor, politician, schoolteacher, journalist and more. Some of the cast haven’t acted for decades and were very wary of stepping onto a stage again, but I knew how talented they had been as actors, and talked to them and eventually persuaded them and now it is as if they have never been away. It’s a bit like riding a bike – you don’t forget how to act, though you may need to work on your voice again. And having to learn lines again is excellent for the memory. I should know… I’ve had to learn 250 of them for this part!” 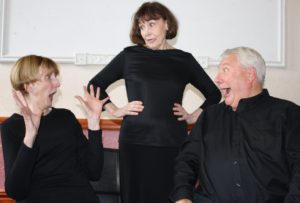 “Are we trying to make an anti-ageist point here? Not at all… the reasons are mainly practical: it’s only because most of us have now retired from full-time work after busy careers that we are able to devote the considerable time required to rehearse like this, over a period of months, converging regularly from different parts of the country, and then embarking on what for many of us is our first overseas drama tour,” explains Robert. “We are also fortunate enough to be able to fund our own flights from the UK, food and accommodation. No-one is being paid: we are ‘amateurs’ in the true sense…. taking this wonderfully funny and poignant play on tour for the sheer love of theatre and great literature, and what these can both bring to an audience.” 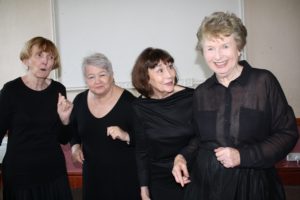 Robert is cautious in choosing his words. “I don’t think what we are doing is self-indulgent: don’t run away with the idea that we are just a bunch of pensioners looking for another Marigold Hotel,” he says with a laugh. “We are very professional in our approach; we have worked extremely hard for months, and the standard of performance will be high so there should be a lot of laughs in the theatre. I am not sure what our lead actor James Aust, who’s in his mid-20s and playing the massive role of First Voice, quite makes of us, but we all seem to get on just fine.”

Versatility is at a premium in this talented cast. There are 69 speaking parts in Under Milk Wood so with ‘just’ 11 actors, each individual actor must play several different characters who range from young children in the schoolyard to a 17-year-old girl looking for love, a blind sea captain, an 85-year-old pensioner, and even a ghost.
But Robert says audiences don’t seem to mind… far from it.

“It is becoming fairly common, an accepted practice and convention now in professional UK theatre, for actors to play characters of all ages, even children. I went to see a recent much-praised production, The Lehman Trilogy, in London’s West End and starring the celebrated Simon Russell Beale. It had a cast of just three: excellent actors but all fairly grizzled older men who would suddenly switch for a few moments to playing young women or children, much to the audience’s amusement, so that reassured me that we are in good company.” 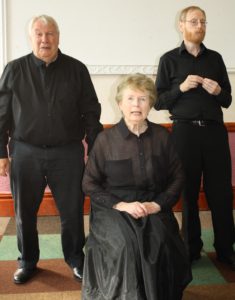 The appeal of this marvellous and highly entertaining play sweeps across all ages and demographics and cultures. It’s been translated into 30 languages and Robert says the drama seemed a natural fit for audiences in Malta. “The parallels with Wales seem striking: both are small proud independent maritime nations with a strong bilingual culture. Milk Wood is set in a small Welsh seaside town with quirky and eccentric characters – but it could be anywhere. Look around you and you’ll recognise so many of them in the communities where you live.”

“In essence, the appeal of the play – so memorably charting 24 hours in the life of this small forgotten town and its eccentric inhabitants – is its universal themes of love and loss, dreams and despairs, its brilliant humour and soaring, lyrical language, all set against the background of Dylan Thomas’s “sloeblack, slow, black, crowblack, fishingboat-bobbing sea”.

The Moonlight Theatre production of Under Milk Wood by Dylan Thomas will be performed at Valletta Campus Theatre (ex MITP), Merchants Street Entrance, Valletta, on 17, 18, 19, 20 October 2019, with all performances starting at 7.30pm. Tickets start at €10 and are available online at www.ticketline.com.mt or via Moonlight’s Facebook page at www.facebook.com/moonlightheatre

British Theatre Company to Bring Under Milk Wood to Malta