When it comes to #FrenchGirlStyle, Brigitte Bardot sets the precedent. Born in 1934 and raised in Paris, Brigitte Bardot was an actress, model and singer popular in the 1950s and 1960s. Having started off as a ballet dancer, Bardot, or B.B as she’s still affectionately known as, moved on to become an It Girl of the times. Her style is still a reference point today, and many of her signature looks remain timeless.

Her aesthetic was youthful and playful yet seductive, and broke the overstyled molds of the time. A “Bardot neckline” refers to the sexy off-the shoulder peasant tops still on trend this season. B.B’s hair was tousled and teased, unlike she sharp crops and bobs of the sixties. She oozed sex appeal, and in fact, the term “sex kitten” was invented to refer to B.B herself!

Brigitte Bardot even has a pose named after her – The “Bardot Pose”; in which she posed for the photographer’s lens sitting down in black Lycra tights, with her legs crossed in front of her body. The pose has been replicated countless times by celebrities from Elle Macpherson to Lindsay Lohan and even Rihanna!

Brigitte Bardot’s look has been a source of inspiration for fashion lovers ever since her heyday, when Bardot mania was very real! Some photos of Brigitte Bardot back in the day bear a striking resemblance to Kate Moss, especially when you count the trademark cigarette and smoldering boyfriend in tow.

On her 86th birthday, Indulge takes a look back at Brigitte Bardot’s signature style. Here are five ways to get her classic retro French Girl Look! 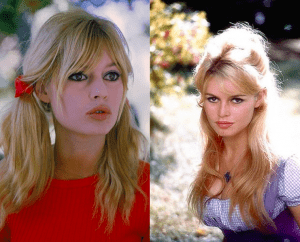 The Beehive was a popular hairstyle of the sixties but B.B wore hers artfully disheveled instead of coiffed and polished. Her long fringe and choppy layers frame her sultry kohl-rimmed cat eyes perfectly. A masterclass in the rock ‘n’ roll girlfriend look. 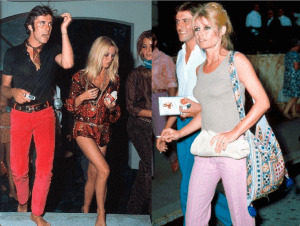 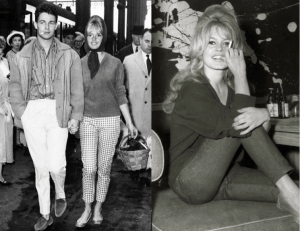 Brigitte Bardot loved gingham so much that she even married her second husband, actor Jacques Charrier, in a pink gingham dress back in 1959. Seen with him here in gingham cropped trousers, her country look, along with on-trend wicker bag, is as cottagecore as it gets. 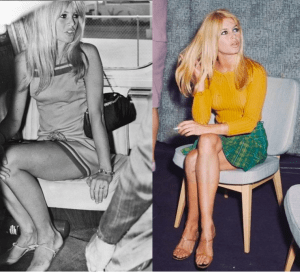 With long legs tanned in the south of France, Brigitte Bardot was a lover of mini skirts and minidresses- and who could blame her! The new hemlines of the sixties were taken for a spin by the Parisienne starlet, and she paired them with nude flats in ballet pump and T-bar styles. 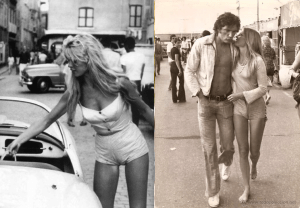 Teeny weeny hot pants and Brigitte Bardot go together like coffee and a croissant, and the European film and style icon knew the power of a great cut! Whether she teamed them with hippy bell-sleeved tops or a twinning cami, B.B set the trend for festival waifs for decades to come.

Who would you like to see next in our Indulge Vintage Style Icon Series? Let us know in the comments on Facebook! XX

Base Series - The Concealer