The press and doting fans alike couldn’t keep their eyes off Lady Diana Spencer ever since she was catapulted into the public eye in 1980 as Prince Charles’ then- girlfriend. After all, he is the heir to the throne.

They married in 1981- Diana, 19 in a fanciful meringue of a wedding dress with a 25ft train. Bombastic, lavish and regal; fabricated in silk taffeta and antique lace, it was exactly what the world wanted to see. Sadly, troubles were present in the royal couple’s relationship from early on.

Princess Diana loved fashion, and fashion designers loved her! Friends with everyone from Gianni Versace to Valentino Garavani, Diana knew how to dress up for formal engagements with pizazz. On the flip side, she nailed smart and preppy casualwear in her downtime, whether it be on missionary trips in Africa, watching the polo or spending time with her beloved sons.

Princess Diana’s 1980s style saw her wear some seriously fussy outfits. Top-to-toe tartan, frills and silhouettes favoured in that decade are often harder to interpret into today’s wardrobes. Diana really came into her own in the nineties, honing her style into a more minimal approach to dressing which saw her donning relaxed basics such as the varsity sweater, baseball caps and sporty seperates and swimwear. Then of course there was that black dress which she showed up in after the news that Prince Charles had had an affair had emerged in the media.

Before meeting her tragic and untimely death in 1997, Lady Diana was in love and in the prime of her life. Her last summer saw her photographed by legendary fashion photographer Mario Testino. Her hair was highlighted in soft honey blonde and champagne tones. She socialised with Elton John and Naomi Campbell whilst still making time for her philanthropic work in Bosnia and Pakistan. She holidayed on a luxury yacht in Sardinia and met with Mother Theresa in the Bronx. Most of all, she was happy, which is the best style tip anyone can give.

For this month’s Style Icon Series installment, Indulge takes a look back at some of Lady Diana’s vintage Winter looks. 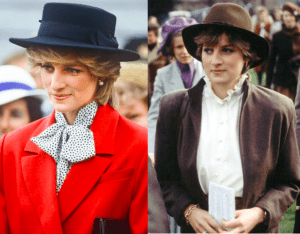 A pussy-bow or ruffleneck blouse is a dressy way to keep warm in the chillier months. Romantic and feminine yet smart, this vintage look is perfect for both work and weekends. Princess Diana looks remarkable in this sharp tomato red coat and polka dot blouse. We can see the influence Lady Diana has had on her daughter-in-law Kate Middleton, The Duchess of Cambridge! 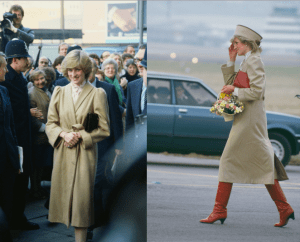 Princess Diana knew the power of a camel coat. Light colours such as beige and cream in Winter are unexpected, and so flattering. We love the eighties shoulder cut of this belted beauty over a high-necked blouse. There’s no need to save a camel coat for formal occasions, as they look chic and modern over a vintage tee and leather trousers. 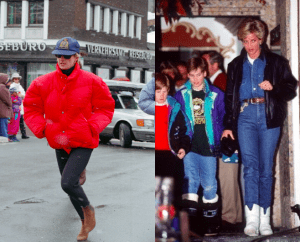 This puffer jacket look paired with skinny fit trousers, Chelsea boots and a baseball cap could be straight out of today’s celeb paparazzi snaps! Oversized puffer jackets are back in a big way, and just how cool does Lady Di look in this denim jumpsuit and leather jacket on a skiing trip with Princes Willian and Harry? 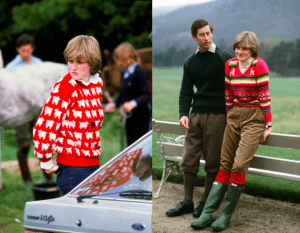 In the early stages of Charles and Diana’s marriage, Princess Diana was snapped at a many a polo match wearing a sheep motif jumper. Notice the black sheep! Princess Diana knew how to make a subtle statement with her clothes. Incidentally the “black sheep” jumper by British knitwear label Warm & Wonderful sold out by mail order almost immediately after its first sighting.

A Princess who wore jeans! Early nineties casual Diana style often included light denim paired with cowboy boots and an oversized knit jumper or graphic sweater. Pictured on the right in 1992 at yet another polo match, Lady Di looks effortlessly cool, styling hers with a manly blazer and her favourite cap. Notes taken.

The Trial of the Chicago 7-Review

Emerging artist Anna Calleja to exhibit at the MSA