Madonna is the undisputed Queen of Pop and one of our all-time favourites here at Indulge! As she celebrates her 62nd birthday this month, the star’s career in the spotlight spans almost forty years since she burst onto the scene in 1982 after signing a singles deal with Sire Records. Since then, Madonna’s music has reigned over the airwaves, and her ever-changing style has kept fans on their tiptoes, hungry for her next move.

Madonna’s style is what elevates her from a singer to an icon, and, never shy of controversy, she pushed the boundaries of what is deemed “acceptable” way before today’s scantily clad stars. Not only did she dress in less, exploring female sexuality, but she also toyed with the concept of religion, using motifs from the Catholic faith as accessories. It’s fair to say ‘Like A Prayer’ was scandalous in 1984 to say the least, and can still be considered more than risqué today.

The expert of reinvention pulls from ideas from the past to create her looks, and uses her very being as a vehicle for art and popular culture. In 1991 she attended the Oscars with none other than the King of Pop Michael Jackson, one of the greatest entertainers in the history of music. If that wasn’t peak pop culture enough, Madonna wore a bejeweled dress and fur stole a la Marilyn Monroe, complete with accompanying 1950s hair and makeup. This wasn’t the first time Madonna channeled the screen siren, as her 1985 music video for ‘Material Girl’ will attest. Who could forget that hot pink satin dress inspired by Marilyn’s number ‘Diamonds Are a Girl’s Best Friend’ from the movie ‘Gentlemen Prefer Blondes’!

Madonna has drawn from Disco to Goth and everything in between for inspiration. In her early years, around the release of ‘Lucky Star’, Madonna had every girl wearing rubber bracelets and hair bows. In 2000, she released her eighth studio album ‘Music’, sparking a trend for anything rhinestone cowgirl. When Madonna decides on a theme for an album or tour, she commits to it head-first, until it’s time to reinvent herself again.

Madonna’s looks are seriously out there, but there are some staple ensembles and styling tips that can be applied to your own wardrobe. To celebrate the Queen of Pop’s birthday month of August, Indulge looks back at five of Madonna’s looks for styling inspiration. 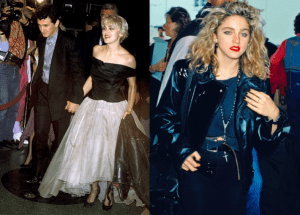 Not just for Harley Davidson fans, rockers and greasers, Madonna shows how you can toughen up a dainty look with this wardrobe staple. Pictured here in a glossy number dressed down with a t-shirt and jeans, this casual look is timeless. Even Kendall Jenner could get away with wearing this today! In this snap from 1986 attending a film premier with then husband Sean Penn, Madonna adds interest and depth to her look by toting along a beaten-up leather biker jacket with her volumous fifties-inspired ball gown. Very pre-Kate Moss. 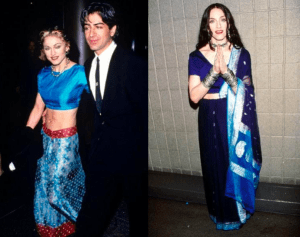 These days, a celeb in the spotlight would probably be blasted for cultural appropriation by adorning themselves in the traditional dress of a culture that isn’t their own in such a head to toe way! But pre-twitter, Madonna went through an Indian inspired dressing phase, around the time that she was first really looking into exploring spirituality. We love this silk crop top and sari fabric skirt worn in 1994 which definitely had a part to play in the bindi trend that followed. We reckon a young Gwen Stefani was taking note! 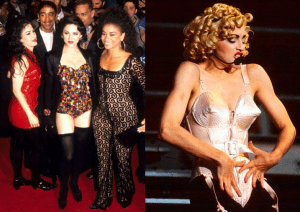 Madonna started out as a dancer in New York after dropping out of college in 1978 to persue her dreams. In 1990, thirsty to know about “Voguing”, a dance craze that was the rage in the underground black and Latino gay scene, Madonna asked her classically-trained backing dancer, Dominican American José Gutiérrez to show her what “Voguing” was. The rest, as they say, is history! On her Blonde Ambition tour, Madonna wore that legendary Jean Paul Gaultier conical bustier, and pictured here in 1991, glittering Burlesque-inspired Dolce & Gabbana. 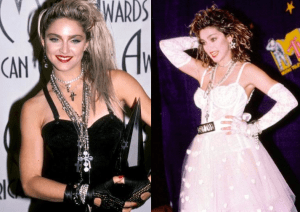 Madonna is the champion of underwear as outwear, and in 1984 she changed the face of pop music with her first Number 1 hit ‘Like A Virgin’, wearing a cheeky bridal-inspired corset and long lacy gloves. When people think of Madonna’s quintessential 80s look, this aesthetic instantly springs to mind, with added accessories piled on, including daring rosary beads, multiple studded belts and bracelets and bows in her teased, rooty bleached hair. 1985 flick ‘Desperately Seeking Susan’ is a masterclass in early Madonna fashion, sparking millions of fans to ‘Get Into The Groove’! 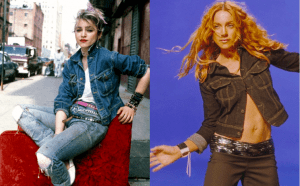 Out of all the Madonna fashion fads, her love for denim is the most withstanding and wearable reference point. Madonna’s been doing double denim since the eighties, rocking distressed jeans and customised, graffitied waistcoats inspired by the punk movement, to sharp, studded boot-cuts in her cowgirl ‘Music’ days. Madonna was at her most down to earth with the release of ‘Ray of Light’ in 1998, wearing a dark denim jacket with nothing underneath, showing off her washboard abs. Denim is a nod to the all-American, and as American pop culture icons go, Madonna has to be way at the top of the list.

The Toy that keeps on giving!