Known for her ethereal look and matching songwriting, Stevie Nicks was the epitome of the shaggy haired, band-on-the-road look in the late 1970s. An original festival chick, Stevie Nicks’ style has inspired droves of free-spirits, from Kate Moss to Florence Welch.

Stevie Nicks has quite suddenly caught the attention of a younger generation when Tik Tokers began using Fleetwood Mac’s ‘Dreams’ as the backing track for their chilled skateboarding clips. The viral videos have catapulted the band’s discography back into the charts, and we couldn’t be more pleased!

For this Vintage Style Icon instalment, Indulge takes a look back at some key pieces from the Rock ‘n’ Roll Hall of Fame legend. 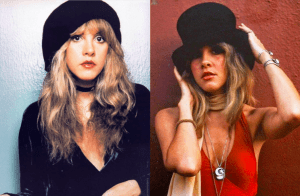 Stevie Nicks is definitely a hat person. And when all styles suit her so well, who could blame her! We’re talking all sorts of styles, top hats are a favourite seen time and time again, but loose velvet beanie styles and baker boy caps get a good wear too. It’s something about the flicky fringe and layered hair that just offset them so gloriously. Bring back the hat! 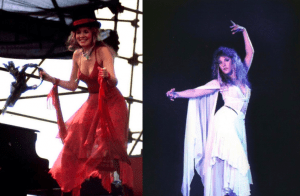 Stevie Nicks’ whole look can be described in one word: layers. The asymmetry of these tiered dresses give them a whimsical feel, and they’re perfect for swishing about on stage with. If you’re going for the Stevie Nicks aesthetic, look out for long chiffony styles like this ruby red festival number. Bonus points if there’s extra material to tie to your wrists for extra sleeve drama! 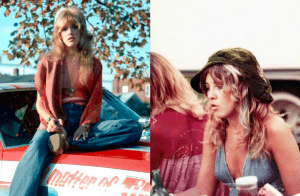 Chiffon, lace, beading and silk are all well and good, but some instances call for some good old fashioned denim! Pictured backstage at Sunday Break Festival back in 1976, Stevie wore a denim halterneck top and looked the epitome of a Seventies band babe. Pictured looking cool as ever atop a car’s bonnet rocking light denim flares, Stevie Nicks almost makes us want to ditch all our black skinnies. Almost. 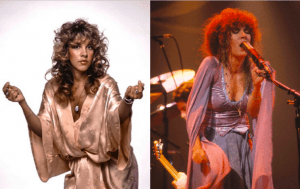 Wrap tops with loose, billowing sleeves are a recurring garment style worn by the legendary songwriter and vocalist. Once again, wraps and kimonos are another way of adding layers, which add interest to an ensemble. The ‘Go Your Own Way’ singer didn’t wear bright colours or loud patterns, preferring interesting textures such as velvet, satins and chiffons. It’s a lot about the movement of the clothes that makes up Stevie Nicks’ look. 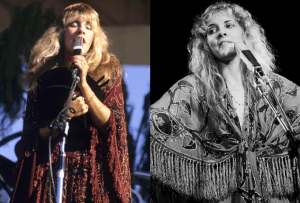 No list on Stevie Nicks’ style would be complete without a nod to her iconic shawls! They were all part of the inimitable stage presence of Fleetwood Mac, who’s songs like ‘Rhiannon’ and ‘Gypsy’ merged seamlessly with the fringed and tasseled beauties. Stevie Nicks was once quoted as saying “Madonna’s a chameleon. Lady Gaga’s a chameleon. Miley Cyrus is a chameleon. I just wanted a uniform so that I could just go out there and sing, and know that my outfit was great, and not have to worry about it every night.” Stevie definitely had a “formula”, and we can get behind this dressing sentiment!

Tag a Fleetwood Mac fan in the comments on Facebook! Xx