The team behind the wildly popular Shakespeare at the Pub series take on a new production of internationally acclaimed comedy, Art by Yasmina Reza

WhatsTheirNames Theatre are returning in February with a hilarious comedy, Art by Yasmina Reza.

As the company behind the popular Shakespeare in the Pub and Shakespeare in the Garden series, WhatsTheirNames returns to its roots with the new show, having burst onto the Maltese theatre scene with a critically acclaimed production of Art in 2010 featuring the same director, Malcolm Galea, and the same cast, Nathan Brimmer, Philip Leone-Ganado and Joseph Zammit.

Yasmina Reza’s massive international hit play about art and friendship is fitting for the friends at WhatTheirNames who have now created theatre together for more than 12 years. Art tells the story of Serge, who has paid a huge amount of money for an unusual contemporary painting – a completely white canvas. He cannot understand why his friends are not as excited about his new artwork as he is. Marc hates the painting and cannot believe that any friend of his could possibly want it. Yvan attempts, unsuccessfully, to please both sides. As a 15-year friendship is pushed to breaking point, the three must ask: Are you who you think you are or are you who your friends think you are? 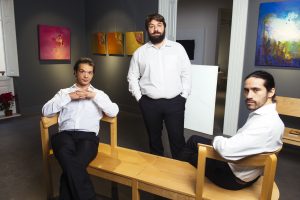 “Art is one of those modern classic plays that you simply have to see at least once in your lifetime. It’s such an insightful observation into male relationships from a woman’s perspective and still as bitingly relevant as it ever was,” says director Malcolm Galea. “When I first directed this cast in 2010, it was an ambitious task as they were all relative newcomers. Fast forward 12 years and our approach is markedly different. Now, as theatre continues to gain momentum, Art is an ideal vehicle to lure audiences back. It’s funny, profound, and masterfully performed by the young(ish) cast.”

Reza’s witty dialogue in Art made the hysterical and incredibly relatable comedy a hit following its premiere in France in 1994, with later runs in London and on Broadway. Art has also won countless awards including the Laurence Oliver Award for Best New Comedy and the Tony Award for Best Play.

This latest WhatsTheirNames production of Art by Yasmina Reza – designed by Romualdo Moretti and supported by Arts Council Malta – is presented by arrangement with Concord Theatricals Ltd on behalf of Samuel French Ltd.

Art by Yasmina Reza will take place on February 4, 5, 6 and 11, 12, 13 at the Blue Box Theatre at M Space, Msida, at 8pm. Tickets can be purchased online at www.bluebox.mt. For more information visit www.facebook.com/whatstheirnames or email whatstheirnames.theatre@gmail.com. The project is supported by Arts Council Malta through the Programme Support Scheme. As per current COVID-19 guidelines, masks must be worn at all times and audience members are required to present a valid vaccination certificate at the door. This performance is not recommended for audiences below the age of 12.