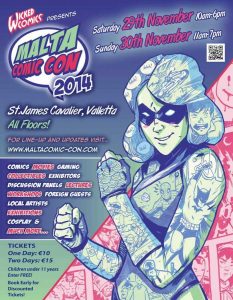 The little nerdy birds in all of us are singing, as the age old question for comic book fans returns again this coming weekend with Malta Comic Con 2014.

The tagline for this edition is Where Dreams Come True. Covering anything from classics to modern heroic (or not-so-heroic) tales, the convention celebrates the comic medium by inviting some of the best artists on the rock as well as internationally renowned figures in the scene to chat, discuss, sketch with and for like minded individuals. Foreign Michael Dialynas (The Woods) and Lew Stringer (The Beano) will be joining, as well as Malta-bred and London-bound Daniela ‘iella’ Attard (The Ugly Duckling).

Besides plenty other exhibitors and artists, the programme includes workshops, lectures, live sketching, discussion panels, cosplay, film screenings (of The Hobbit!) gaming and all sorts of other fun to do with legendary superheroes and their thrilling alternate worlds. If you and your sketching pencil are up for it, there’s also an exciting competition which has participants sketching superheroes in one minute!

Organised by Wicked Comics, Malta Comic Con will be hosted at St James Cavalier on November 29th and 30th. Entrance is €10 per day or €15 for the entire event and free for comic book-loving kids under the age of 11.