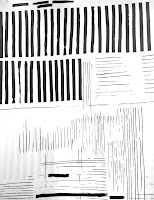 Now this may not look like much to you, but it is the result of my very first calligraphy course.

In between editions, I am trying to learn something new that I can master, write about in one of the magazines I freelance for, or just have fun with.

My pattisserie course at ITS is coming to an end, my first novel is taking shape and I have lined up some ideas and travels for after the Spring 2012 issue. I would have never gotten round to doing all the things I want to when I had a real job, the support and energy for my relentless enthusiasm from John is a major factor.

The course, which is 10 weeks long, is being held at the Bir Mula Heritage Centre in Cospicua, and is being run by sculptor and calligraphy practitioner,  Dorissa Vella, who you may remember from the Autumn issue (number 3) of indulge. Though the end result is tangiable, the work involves patience and focus.

Apparently, we will progress to mastering the alphabet and illumination, so this year’s Christmas cards may actually be legible.

The centre is holding an introduction to Japanese Culture on the 20th and 27th January from 7.30 pm – tickets are just 5 euro.

Who says there is nothing to do in Malta?! Not me…..

Learn how to Salsa in one day